In the past two weeks, one San Juan Island resident suffering from depression ended his life, an elderly man sitting on a courthouse bench cut his throat, and San Juan County Sheriff's deputies responded to three attempted suicide calls.

According to information provided by PeaceHealth Peace Island Medical Center, the situation that  most often leads to suicide is when stressors exceed the current coping abilities of someone suffering from a mental health condition. Depression is the most common condition associated with suicide, and is often undiagnosed or untreated.

Psychiatrist Mark Newman, who treats islanders through PIMC's tele-psychiatry program, was  quite surprised of the severity of the mental health problems in the islands according to PIMC's Behavioral Health Consultant Gary Waters PhD.  Dr. Newman thought there would be much more passive, much less severe mental health cases.

Some of the theories for the acuity are the high rate of alcoholism and drug abuse in the islands. This is not skewed by the amount of alcohol sales, Waters says. Data is not collected on sales, but on residents' usage. Another theory is that some  people who elect to live in the islands may feel fairly isolated in the winter.

Waters said, "There are very few prevention programs, we don't do a lot to keep people from getting to the level where it is dangerous." He says there are good reasons for to keep people healthy not just treat them for sickness.

According to  Waters, if you know someone who is contemplating suicide the best thing to do is encourage them to see their primary care provider to rule out medical causes. PIMC integrates primary care with behavioral health needs. There is a suicidal protocol. Every patient is screened for suicide, depression, or anxiety.

With Waters on staff, instead of handing the patient a therapist's business card and hoping they make an appointment, the physician can provide an immediate visit with Waters. He sits down right then with the patient in the exam room and listens to his or her needs.  Help starts right then.

Waters says. "I arrange everything. I do an assessment, everything is taken care of - aftercare and followup."

Patients in the Emergency Department are stabilized and then Waters determines what hospital they will be transported to. It could be St. Joseph Hospital in Bellingham, Skagit Hospital or Fairfax Hospital in Seattle. All three have psychiatric wards. A new 116-bed facility in Smoky Point is now available.

Waters has a list of therapists in the islands and on the mainland that he can refer people to and he follows up to make sure the patient has obtained needed help. For the past two years, Waters himself has been providing free therapy. PIMC picks up the cost.

Of the people that are already in therapy, 30 percent see therapists on the mainland. Waters said the reasons are privacy, confidentiality and cost. Many are in contact with their therapist by phone rather than in person. Some are located in California, some as far away as Spain. Waters says some patients sit in their cars and have a therapy session while traveling on the ferry.

The Affordable Care Act (ObamaCare) is behind the move to consolidate for better care and access. The goal is to train people in integrative care.

"It is absolutely the biggest change in healthcare, that I have seen," said Waters. He noted that in his 22 years in the military as a medical officer, it was standard to have the services integrated. He couldn't figure out why the civilian system had separate silos for Physical Health and Behavioral Health.

Both the University of Washington and Arizona State University are part of the ACA's Triple Aim program which seeks to provide:

You can read about UW's Triple Aim program on its website. 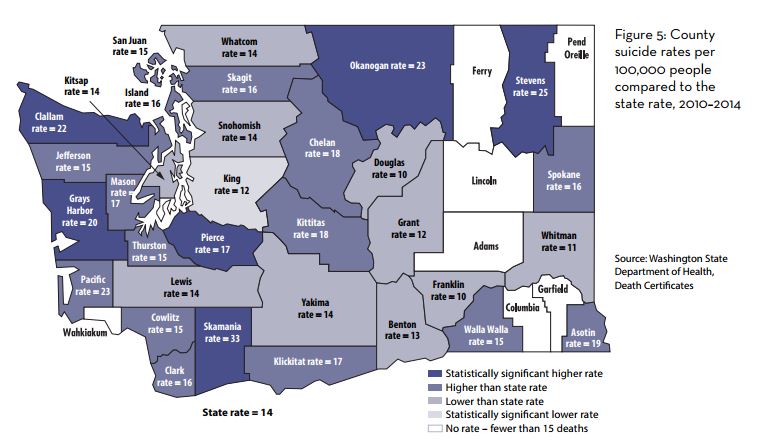 Washington State Dept. of Health statistics show the county's rate as slightly higher than the state average, 15 per 100,000 vs 14 per 100,000. However, breaking that number to the county's population size, the number per year would be less than three.

Regardless of the accuracy of the statistics, there is no doubt suicide is a serious problem in the San Juan Islands. Sheriff Ron Krebs said his staff receives training every year about responding to critical incidents which includes suicide.  Part of the training focuses on techniques to use to de-escalate situations.

Waters said, "Every suicidal patient is unique. It is hard to generalize. The highest rate is for white males over the age of 55 and the rate goes up as they get older... Youth are also at high risk," Waters said. "It's important to determine their lethality, how lethal they are. Do you have the means to do it? Do you have firearms? Do you have a boat?"

There are three aspects to suicide:

It can be minutes between the three stages or years. Someone may be depressed for years, thinks about suicide but never acts on it.  Or someone may be impulsive and end their life immediately after being diagnosed with a serious disease.

Talk - If a person talks about:

Being a burden to others

Having no reason to live

Behavior - Specific things to look out for include:

Increased use of alcohol or drugs

Looking for a way to kill themselves, such as searching online for materials or means

Isolating from family and friends

Sleeping too much or too little

Mood - People who are considering suicide often display one or more of the following moods:

Waters has interacted with more than 500 patients in the two years he's been at PIMC. He retired and moved to San Juan Island from Las Vegas. He had earned his PhD in Behavioral Health Care from Arizona State University. He wanted to volunteer to help the community and ended up working at PIMC. In addition to working with patients in Primary Care, he also is called into the Emergency Department as needed.

"Have we prevented suicides?" he said.  "Yes,  because we got people the right care they needed at exactly the right time."

Next week: What's on the horizon for suicide prevention

1. People who talk about suicide won't really do it.

2. Anyone who tries to kill him/herself must be crazy.

3. If a person is determined to kill him/herself, nothing is going to stop them.

4. People who die by suicide are people who are unwilling to seek help.

5. Talking about suicide may give someone the idea.

6. Only a mental health professional can help a suicidal or severely depressed person.

7. A suicidal person does not need a medical consultation, review or examination.