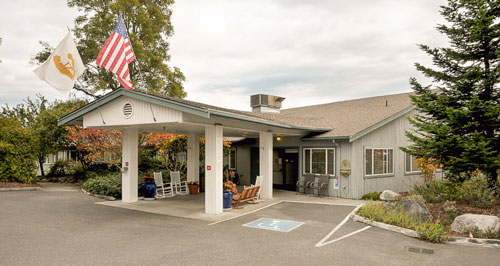 Financial problems caused by lack of payer mix, difficulty hiring and keeping staff because of low pay and lack of affordable housing were cited as the top reasons for the upcoming closure of the convalescent center in Friday Harbor. Islanders gathered at the Mullis Center on September 25  to brainstorm ideas to solve the problems created by the closure of Life Care Centers of America's Friday Harbor facility set for November 30, 2017.

"All these ideas are wonderful, but...," said one woman who had started working at the convalescent center as a candy-striper. "One of the really major things we have to address before any facility is thought about - How are we going to staff it? They will come if you pay them well. They are not going to come if they have to live in a tent."

The need for a mix of payers was stressed. According to a staff member, who was not speaking on behalf of the facility, this month there were 34 patients, two private-payer and 32  Medicaid - which pays only $185 per day. The cost is $278 per day. Life Care Centers of America was willing to lose $250,000 per year but the loss exceeded that. Having multiple payer sources and providing multiple services is key to meeting community needs, said another.

Staff and patients were not told about the closure until the morning of September 13, 2017. According to staff, they were then told the corporation had tried for two years to sell the building and the business which was started in 1967 by Gale and Doreen Carter. LCC purchased the business and building in 1997. There is currently a mortgage on the building.

Ideas batted about included combining other services - such as adult daycare, respite care, daycare for children - with the rehab and convalescent services currently provided by LCC. Forming a non-profit to operate the facility was mentioned. Non-profits can apply for grants.

Passing a levy or increasing the current hospital district levy were also mentioned. Either idea requires voter approval. Looking at the problem as a county-wide one and raising funding from all the islands was also suggested. A 20-cents per $1,000 of assessed value levied county-wide would raise approximately $1.3 million annually and would cost the owner of a $500,000 house $100 per year. Using the tax money to "subsidize" a non-profit facility is one idea.

Dr. John Geyman said the situation is a national problem.

Ideas that were "out of the box" were encouraged. One young woman, who had worked at LCC for six years said, "We could take some advantage of our vacation status. A lot of people live off of tourism. If you were to make a rehab retreat option, where  they come and they are wined and dined, and they rehab and as they get ability they are walking on the beach...That would bring outside money into the building that would then flow over to cover the costs of some of the people who aren't meeting the costs."

San Juan Island County Public Hospital District #1 Commissioners will hold its regular monthly meeting at 5 p.m. Wednesday, September 27 in the county's Legislative Building at 55 Second Street. A discussion about the issue is on the agenda.

5. Hospital districts (all of them), gov’t solution

11. What are our needs? Clarify them, before raising funds

17. Village at the Harbour extra support, to take on some LCC residents

21. Reaching out to owners for donation of facility or extended operation of LCC