WSDA PRESS RELEASE: The Washington State Department of Agriculture (WSDA) has confirmed rabbit hemorrhagic disease virus 2 (RHDV2) in three feral domestic rabbits found dead on Orcas Island. The findings are part of the ongoing investigation into a case of RHDV2 confirmed on the island earlier this month in pet rabbit that died suddenly. 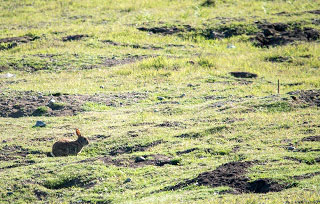 RHDV2 has been confirmed in the feral rabbit population on Orcas Island. Washington State Department of Agriculture (WSDA) is no longer asking for reports and collection of dead wild or feral rabbits on the island.

RHD is a viral disease that causes sudden death in rabbits and can be spread through contact with infected rabbits, their meat or their fur, or materials coming in contact with them. It poses no human health risk.

Now that the disease has been confirmed in the feral population on Orcas Island, WSDA is no longer asking the public to contact our office for testing of the feral or wild rabbits there. WSDA would still like reports of rabbit mortality on any other island or the mainland to track the virus presence and movement. Domestic rabbit owners who suspect their rabbits have died from RHDV2 are still urged to contact their veterinarian and the Washington State Veterinarian's Office.

When was the disease detected?

The Orcas Island outbreak response began on July 9, 2019 when the state vet's office received a report of a dead domestic pet rabbit from a veterinarian clinic on Orcas Island. The veterinarian and the owner suspected possible RHD and contacted the State Veterinarian’s Office. The remains of the dead rabbit were sent to state and federal animal disease labs for testing. On July 18, the U.S. Department of Agriculture’s (USDA) Animal and Plant Health Inspection Service (APHIS) confirmed the disease.

Following the confirmation of RHDV2, Acting State Veterinarian Dr. Amber Itle, went to Orcas Island to interview the pet owner, talk with local rabbit owners and look for evidence of the disease in the feral population. The infected property is currently under quarantine.

“I talked with several rabbit owners, a breeder, a local veterinarian clinic, an extension agent and an animal rehabilitation center in the area,” Dr. Itle said. “Their cooperation helped me get in contact with a resident who found several dead feral rabbits. After testing those rabbits, we are relatively confident the disease has taken hold in the feral population. At this time, reports have been localized to a one-square-mile area. No further testing is necessary to confirm that fact.”

How can I prevent the spread of RHDV2?

Quarantine new rabbits away from existing ones for 30 days.

Keep pet rabbits inside to avoid exposure to environments potentially contaminated by wild/feral rabbits or by people, vehicles or implements that can spread the disease.

Immediately contact your veterinarian if you suspect RHD or have sick or freshly dead rabbits.

If you have animals not freshly dead, bury them and clean and disinfect any associated shovels or other tools used and wash hands, gloves, footwear and clothes.

If you cannot bury or compost them, double plastic bag them and dispose in a landfill.

Prior to this detection, Canadian animal health officials confirmed the disease in feral rabbits in British Columbia in February, 2018. The disease has since been confirmed in 10 locations in and around Vancouver Island. The first case of RHD2 detected in the U.S. was last September in Ohio.

There are two main types of the virus, RHDV1 and RHDV2. The strain found in Ohio was similar to the Canadian RHDV2 strain.

Although RHD poses no risk to human health or other animals, hares, jackrabbits, and wild eastern cottontails may be susceptible to RHDV2. The rabbit that died on Orcas Island was a pet, 2-year-old, male dwarf rabbit. No other rabbits are on the property.

A vaccine for RHDV2 is not currently available in the U.S. Rabbit owners should practice good biosecurity measures to protect their animals from this disease, such as washing your hands before and after working with rabbits and not sharing equipment with other owners.

We recommend that no one move feral or domestic rabbits from Orcas Island.