The fourth draft of the proposed contract handing administration of San Juan Island EMS over to the San Juan Island Fire & Rescue Dept wasn't ready until a few hours before the Public Hospital District #1 meeting. PHD Commissioners Warren Appleton and Anna Lisa Lindstrum both objected to discussing something they hadn't been able to read before the meeting. 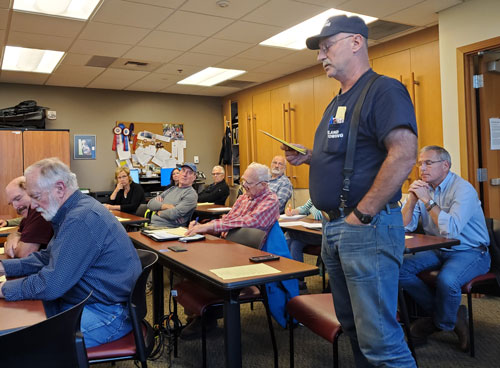 Appleton said he wished he had known a fourth draft was being written as he  had stayed up late going through the third draft and had 27 questions about that one.

Referring to the controversies that have plagued SJ EMS and the lack of transparency in drafting the contract,  Appleton said, "This community has big wounds that need to be resolved. I don't understand what the hurry is....This is doing the community a disservice.... and is widening the wound."

After Lindstrum asked what the rush was, Edwards who lives part-time in San Diego County in California and was attending the meeting via Skype answered. He said, "This has been a work in progress for many, many years. We have an opportunity to strike a bargain."

The board agreed to table the motion after adding an amendment that they hold a special meeting to discuss the draft contract. Commissioners Rebecca Smith, J. Michael Edwards, and Mark Schwinge pushed to set one for next week. No date was set during the meeting. Smith said she would meet with PHD Superintendent Pam Hutchins to set one.

The public comment portion of the meeting occurred before the PHD Board discussed the draft contract. All six of the people commenting, urged the board to slow down.

Gene Wilson said, "I'm Frank Wilson's little brother." [The late Frank Wilson started EMS services on San Juan Island.] He noted the last time the two agencies were together it hadn't worked out as the fire district was more interested in the chrome on the wheels than they were in medical equipment needs.

He mentioned an article "Woman overboard, Customs Officer to the rescue" which includes this paragraph: [SJIFR Chief] Collins said the interaction between SJIF&R and SJ EMS was especially good. They were on the same radio frequencies and there was only one person in command. He said it bodes well for integration of the two departments. "That's the farthest thing from the truth,"  Wilson said. "I think maybe it's time for EMS to stand on its own," Wilson said.

Rick Frazier, who was one of five citizens who served for a year on the Citizens Advisory Committee that researched the idea of the two agencies consolidating, read a statement:

"My name is Rick Frazier and I wanted to address what I perceive as a premature takeover of the EMS System by the Fire System. It goes to the intent of a contract that was introduced at the Fire Department Board meeting last week and has been under development since early summer. As many of you are aware, I was part of the Citizen Advisory Group that was chartered to analyze the integration of the EMS System into the Fire System. The team spent the better part of last year and early this year interviewing many individuals and organizations and gathered a lot of information. One piece of information that was presented was the idea of an inter-local agreement to run the EMS System by the Fire Department while the integration was moving forward.

"At its conclusion the CAG released a document that recommended an integration with several absolute conditions to follow the recommendation. As part of the presentation to the board and public, it outlined its findings and a statement was made to the chair of the CAG, based on feedback to the committee and the committee's discussion, that an inter-local agreement would not be a recommended course of action.

"To date I am not aware that any of these issues have been accomplished or even planned out. I am not aware that any plans have been presented to the community and yet this contractual agreement puts the Fire Department and especially their employee, the new Fire Chief, as CEO of the EMS Organization. The contract spells out that the Fire Chief makes ultimate decisions and runs the EMS Organization. This contract is also being entered into just prior to a brand-new PHD board coming into office (within two months) which leaves the new PHD Board carrying all the liability and exposure of the Fire Chief's decisions without having a vote. And those decisions could carry heavy fines and potentially other penalties as this board is aware.

"While I believe many of the individuals involved in this process have good intentions about their decisions and direction, the ramifications of these actions as even demonstrated this week could have undetermined outcomes.

Gail Leschine-Seitz read a letter from all four of the people running unopposed for the four PHD Board positions up for election in November 2019.

"I'm here on behalf of the four hospital district candidates [Everett Clary, Trish Lehman, Kyle Loring, Leschine-Seitz,] running for office this fall to ask that you thoughtfully approach any proposal to transfer supervision of EMS to the fire district to ensure that it will result in the best possible medical care for our community. We understand that you may be considering relieving the interim EMS chief of his duties by contracting out those responsibilities. We believe that such a decision should not be rushed, especially given repeated statements by the two chiefs that they are working well together to explore the structure of an integrated fire/EMS district. If you do feel the need to enter into an agreement, we request that it embrace best practices and the public interest by:

1. Being the subject of discussion only at a meeting held at a time that working people can attend and only with proper public notice of at least two weeks;

2. Maintaining fiscal neutrality by decreasing EMS expenses in an amount commensurate with the contract costs;

3. Assuring that the fire district has the authority and all of the licenses/insurance/etc. necessary to oversee EMS;

5. Allowing the commissioners to set the fire chief's reporting requirements to the hospital district; and

6. Including a provision allowing for-cause termination of the agreement, at a cost to be shared by both parties. In the current draft the term 'material breach' would need to be defined by both parties, so it is more accurate and clear.

Thank you for your public service, and we look forward to carrying forward the work you have done on behalf of our community.

More in this category: « Dr. House to the rescue The importance of knowing about restrictions placed on your healthcare provider »