Orcas Island suffered a tragic loss mid-2013 when the historic Strawberry Barreling Plant, popularly known as the Artworks Building, was severely damaged by a fire deemed to be at the hands of an arson.

Owned by The Olga Strawberry Council (OSC), a non-profit 501(c)(3), the building housed the Artworks Co-Operative, the Hardman Gallery and Café Olga. 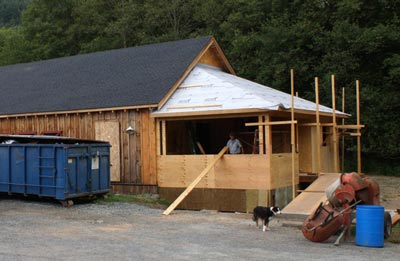 Artworks building restoration - progress of the cafe area as of August 12, 2014.

Restoration began in December, 2013 and is due to be completed in January, 2015. The Orcas Island Artworks Cooperative and Hardman Gallery will be returning to the historic building from temporary locations in Eastsound. Information on the fire and restoration progress may be found at www.olgastrawberrycouncil.org.

The area of the building previously occupied by Café Olga is being restored specifically to house a small cafe, and The Olga Strawberry Council is actively seeking an entrepreneur to rent the space and operate a café in the 832 square foot kitchen and dining room area of the building. Ideally, the atmosphere of the café would be a warm and welcoming area compatible with the art and community situations the building offers.

It is the desire of OSC to have a café in operation at the time of its grand re-opening in January. Interested parties should contact the president of OSC, Patsy Stephens, at 360-376-2599 for specs and additional information as soon as possible so design and equipment specifications may be accommodated during the building process.