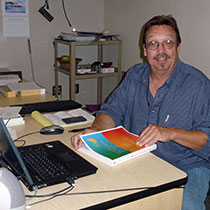 This summer many islanders asked Greg Sawyer if he would be returning to work after undergoing a kidney transplant in May. The Friday Harbor Harbor High School history instructor is happy to be back at his desk

"It seems like I’ve had an inordinate amount of time off,” Sawyer said. “It’s good to be back. It will be interesting to be interacting with the students agaiin."

Preparing for his 15th school year has been "a bit overwhelming" after an extended summer break but Sawyer figures he's probably "over-prepared" this year.

"I feel 20 times better than I did the last couple of years that I worked all the time,” Sawyer said. "So, this won't be a stretch to be back to work at all. I'm sure I'll get tired like I always do...but it will be easier to work now than it was before."

Sawyer’s kidneys were failing due to glomerulonephritis, or GN, a condition he battled more than eight years ago. In Sawyer’s GN case, his immune system attacked his kidneys. Medication stabilized his condition but over the years his kidneys worsened to the point that he needed daily dialysis.

Dialysis is a temporary solution with considerable side effects and is extremely inconvenient. "You gain weight, you can't lose any weight," Sawyer said. "Your diet is fairly restricted. You don't sleep well because you're hooked up to machines all night."

"It kept me going, though, because my kidneys were pretty well done. They were functioning a little bit but not much."

A sister wanted to donate one of her kidneys to Sawyer but her doctors advised against it. Sawyer was on a live donor list for two years and was "close to getting into the zone” for a cadaver kidney. Doctors stressed a live donor is preferred, though.

"How do you go about doing that...I just felt very uncomfortable asking somebody (for one of their kidneys)," Sawyer said. "The doctors told me just to put it out there."

Some of Sawyer’s students helped spread the word by organizing a fund-raising dinner that included information about organ and tissue donation. Islanders, including some Sawyer did not know, offered up one of their kidneys. Doctors determined three potential donors were compatible but a friend, Jenny Nesbitt, was the best match.

Sawyer is still amazed by her generosity. "It was an incredibly selfless thing to do,” he said.

"I talked to some people and they're just really baffled by it," he said. "They said, 'Why would she do that?' Because she's a really nice person I told them."

Nesbitt couldn’t imagine not helping out a friend. "I knew it was the right thing to do," she said. "Greg is one of the most genuine, best people I've met. There really wasn't a question in my mind."

On May 9 one of Nesbitt’s kidneys was transplanted into Sawyer at Swedish Medical Center. "It's a fairly routine procedure," Sawyer said. "They've been doing them for 55 or 56 years. They've got it dowm." 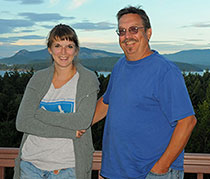 Sawyer was in some familiar, caring hands -- Jenni Griffith, a 2002 Friday Harbor High School graduate, worked the operation as a scrub nurse. "The surgeons really like her," Sawyer said.

He highly recommends the Seattle hospital."Swedish was awesome," Sawyer said. "I was very impressed with them. They do a nice job, they seem to be very thorough, but they're very pleasant. You don't feel like you're some number in a machine.

"They treat you very nicely and they really go out of their way to do that...Everybody from the janitor up is very nice.."

Sawyer's new kidney was inserted into his lower abdomen. The old kidneys were not removed. His body accepted his new kidney with only 'a couple of blips,' he said. "It was more getting used to the medication than anything else."

After being released from the hospital he returned for checkups three times a week. His visits have dropped to once a week and soon he hopes to be making only one trip a month to the mainland.

"You take your medication and try to live healthy and that's not such a bad thing,” Sawyer said. "I'm pretty well recovered right now. They say after two months you're pretty well there. After that you're just building up your strength.

His donor had a "really speedy recovery" after taking it easy a couple of weeks. "I don't even feel like I lost an organ," Nesbitt said.

Sawyer is pleased to be exercising again even if at a slow pace. He is steadily strengthening atrophied muscles by riding a stationary bike and lifting weights. "By next summer I'd like to get into some serious riding," he said.

When Sawyer was on dialysis he couldn’t eat much milk or cheese. Now his diet is less restrictive. "I can eat things with less guilt than I did before," he said.

Aside from taking medication, being extra vigilant about avoiding infections and not competing in contact sports, Sawyer's life has become fairly routine. "A transplant makes your life a little bit more normal... It isn't a cure by any stretch but it makes your life easier," Sawyer said. "Life's better, there's no doubt... I don't have a tube in me any more."

Sawyer is grateful to many students, teachers and other islanders who donated toward his medical expenses and he said remaining funds will be spent on doctor trips and medication. "Everybody has been very nice, thoughtful and concerned," he said. "I mostly want to say thanks for all the support and that the money has been put to good use."

There’s one person he knows he can't thank enough, though. "It's almost impossible to thank Jenny...Anything she ever needs she'll get if I can do it."

More in this category: « The next best thing to being there; DVDs of League presentations Graduation rates range from 67% to 93% in county »