OLYMPIA – There’s no better time to be on the water than in August, during the hottest days of summer.

There’s also no better time to be studying boatbuilding and renovating historic vessels in Washington state. Thanks to grants from the state’s Heritage Capital Grants programs, Washington’s maritime industry is thriving and positioned for a robust future. 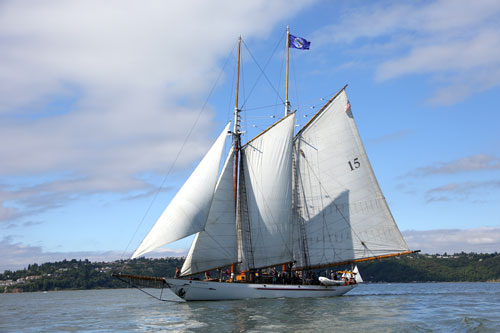 The Adventuress under sail. Photo by Jan Anderson 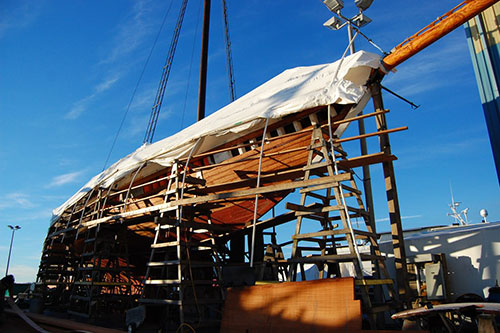 The Adventuress being restored. Photo courtesy of Sound Experience

In Port Townsend, the state’s capital construction budget this year funded 10-12 jobs for shipwrights and tradespeople to restore the deck of the Adventuress, a century-old National Historic Landmark tall ship maintained by the non-profit Sound Experience.

Less than 10 miles south, in Port Hadlock, other grants fund infrastructure and new programs at the Northwest School of Wooden Boatbuilding—and couldn’t have come at a better time. The non-profit school is scrambling to repair the campus seawall and repair leaky roofs before the rainy season hits, even as the school is poised to address industry calls for training in new specialties. 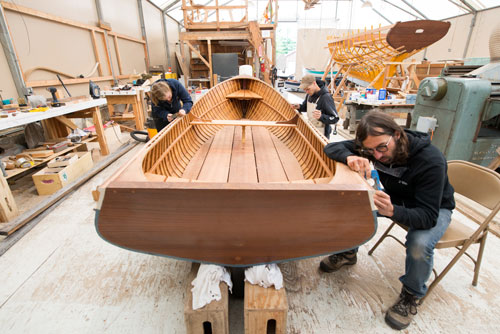 (Above and below) Students honing new skills.  Photos courtesy of Northwest School of Wooden Boatbuilding

“This makes a huge difference to the school that we’re able to fix up some of our boat shop classrooms immediately, because they’re threatened – by the tides and by the leaks in the roofs,” said the school’s executive director, Betsy Davis. “We’re growing, so there’s a lot of need for these facilities. The boat school helps train additional people for jobs in the marine industry, and we couldn’t do that without the facility.” 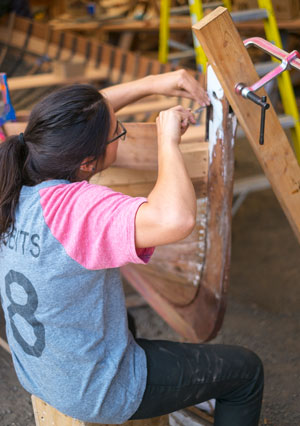 The school has expanded its curricula beyond wooden boatbuilding to add instruction in marine electronics, engines, diesels, hydraulics, corrosion and plumbing — all skills in increasingly high demand as boomers retire.

More than 1,500 people have graduated from the accredited, post-secondary trade school.

“For 37 years, we focused on wooden boatbuilding,” Davis said. “We’re going to continue that but we’re adding this other dimension. We’ve added a six-month program to teach marine systems and we’ve also added a one-week program for people in the industry to come in for a week and learn intensively about a single topic, such as electrical or hydraulics, for working professionals who want to advance their skills in a particular area.”

To Catherine Collins, executive director of Sound Experience, the grants “enable us to remember the state’s history and our heritage and our stories, and at the same time support economic development by providing jobs in maritime trades.”

Though the schooner Adventuress is not a brick-and-mortar school, it plays a major role in maritime education.

“We’re partnering with groups like Port Townsend public schools and the West Sound Technical Skills Center to get kids out on the water where they learn navigation, line handling, engines and electrical systems, knot-tying and other essential sailing skills,” Collins said. “They also learn valuable life skills, including how to steward a ship and a community and how to live aboard in small spaces with other sailors. They have to keep each other safe on the vessel; they pull shifts at night. We teach them how to practice responsibility on the water.”

In the end, she said, “They come off the ship, whether it’s been three days or six days, pretty inspired and looking at the world a little differently.”

At the same time, the growth has pushed the limits of the Boat School. 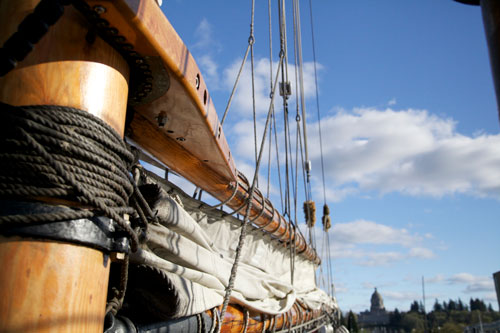 “All of this growth puts pressure on our facilities, which is why this Heritage Capital Projects grant and the timing of it is so helpful,” she said. “It’s just incredible that we have a chance to get this work done before the high tides of winter.”

Shepherded through the Senate and eventually the full Legislature by Sen. Kevin Van De Wege, D-Sequim, the school’s grant provided $360,000 in state funds from the Heritage Capital Projects Fund. To qualify for this competitive grant, the school had to raise $742,000 in donations from individuals and foundations to meet its 2-to-1 qualification requirement.

“Washington State’s heritage funding has been pivotal,” Davis said. “It has been wonderful to have Sen. Van De Wege’s support for these programs, both for us in this district and for people around the state.”

“Meaningful jobs and careers are gold in rural counties like Jefferson and other counties in our district, and it only makes sense to do everything we can to help those who provide those opportunities,” he said. “That’s been my top priority ever since I came to the Legislature and it will be my top priority as long as I serve. These kinds of jobs mean the difference between a thriving community and a struggling community.”

The $394,000 state heritage grant that the Adventuress received, combined with an additional $800,000 in private and federal funds, means the ship’s full restoration can be completed with the final deck phase within a year. A prior state heritage grant supported the restoration of the ship’s hull in 2012. Restorations are performed during the Adventuress’ November-to-February off-season but the non-profit Sound Experience has already begun the pre-work of milling wood and making sure all materials are ready when the restoration can be done.

“The Washington State Historical Society is excited to support these impressive heritage projects that preserve our maritime trades,” said Jennifer Kilmer, the society’s director, who noted also that the Adventuress is Puget Sound’s official environmental tall ship. “These programs will serve thousands of residents on the Peninsula and beyond.”

Over the past 30 years, the Adventuress has helped 50,000 kids experience Puget Sound firsthand through a mix of day and overnight programs. The restorations ensure that that mission will continue and that young people will learn that the water provides valuable career choices.

“The Adventuress will sail for generations to come and take thousands of kids out every year,” Collins said.

Though they are separate non-profit organizations, the boat school and the schooner benefit from a natural synergy.

“There are students who graduated from the boat school, where they’ve learned wooden boatbuilding and craftsmanship, and then worked in the boatyard on projects to restore the Adventuress,” Davis said.

For some, the tie is even more lasting. “There’s a wonderful, wonderful, emerging professional who went through the boat school and worked in the industry and is now a captain aboard the Adventuress,” Davis said.

The benefits to the organizations’ surrounding communities extend well beyond jobs, however.

“This grant program helps to preserve the unique character of rural small towns like Port Hadlock,” said Davis. The restoration of the school’s historic waterfront buildings comes at the same time as the school’s recent purchase of the neighboring Galster House, listed on the National Register and home to the Ajax Cafe. “We are preserving a community-valued historic district right on the water in Port Hadlock.”

“We know when an area has historic significance, it actually brings in development dollars,” Collins added. “It’s a destination.”

“The Adventuress is a national historic landmark, meaning it’s not just a part of Washington state history but a part of our national maritime story,” Brooks said. “Any grant to help this significant historic schooner and to educate children helps maintain our United States maritime history for future generations.”