Seventeen years after San Juan County purchased the 0.9-acre "Mount Property" next to the Village Green in 1994 to create a facility to treat surface water runoff, the Eastsound Constructed Wetland is finished.

During the first 12 years, a number of studies were completed to evaluate stormwater treatment options best suited for the site. The final concept was designed into a three phased project.

A grant from the Environmental Protection Agency funded the construction of phase 1 in 2010 which included the installation of pipe from the treatment facility to Fishing Bay.

Phase 2 included the installation of the constructed wetland treatment facility.

The final phase of the project, planned for 2012, will include piping to convey stormwater runoff from A Street, and part of the Prune Alley and North Beach Road drainages, into the constructed wetland.

Stormwater runoff is one of the largest sources of pollution entering Puget Sound and the Salish Sea. The constructed wetland facility will treat a portion of Eastsound's stormwater road runoff before it reaches marine waters.

The facility consists of a sedimentation basin and a constructed wetland with the capacity to treat 370,000 gallons of stormwater at one time. The small existing wetland located at the western edge of the site was incorporated into the facility.

By slowing the flows, the sedimentation basin allows pollutants and particles to settle out of the stormwater. It then enters the wetland and meanders through vegetation and soil to be further treated by a variety of plants providing a range of capacities for toxin and nutrient uptake, and by infiltration through the soil. The treated stormwater is discharged into the existing downstream piping system.

A community-based aesthetic design review committee was created to assist with Phase 2. Among the modifications made, based on this committee's recommendations, were the relocation of a center trail to a perimeter trail and retention of an existing ‘tree wedge’ for its aesthetic and habitat value.

The committee coordinated the participation of the Orcas Island School Leadership Class for the wetland plantings. Another class will be developing interpretative and informational signs for installation this winter.

With the construction of stormwater inlet piping planned for 2012, the constructed wetland is expected to be fully functional and 'cleaning' up a portion of Eastsound's stormwater by the winter of 2012/2013. 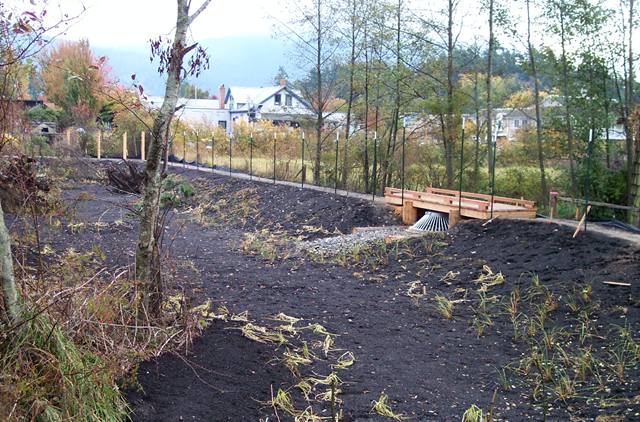