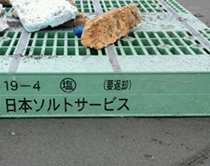 OLYMPIA – Washington Conservation Corps (WCC) crews were sent out last week to clean up increased amounts of marine debris along 57 miles of coastal beaches in southwest Washington. They collected enough material to fill the beds of 70 pickup trucks.

The Washington Department of Ecology (Ecology) dispatched three six-member WCC AmeriCorps crews after the department determined that a recent increase in debris was being deposited on the state’s outer shorelines.

Removal of non-hazardous marine debris is usually handled by the many dedicated volunteer groups that organize regular beach clean-up projects in Washington. Under state and federal statutes, no local, tribal, state or federal agency has the authority, responsibility or funding to pick up marine debris along beaches.

WCC Crew Supervisor Shawn Zaniewski said: “The vast majority of the debris we found was Styrofoam, and it’s hard to say exactly where it came from. We did, however, find some large items with Japanese symbols.”

He said crews also found numerous items with Chinese and other Asian writing on them.

WCC member Jered Pomeroy said he saw a steady stream of debris, noting, “We would clear a stretch of beach and – within 20 minutes – more marine debris washed up. Keeping our beaches clear will definitely take a concentrated community effort.”

Pomeroy and Zaniewski are part of the WCC crew responsible for clearing the stretch of shoreline from Westport to Wash-Away Beach. After their initial sweep, they found a 55-gallon oil drum being washed up by the waves.

The container was reported to state and federal responders, who removed it for safe disposal. Ecology handles 3,800 incident reports involving oil and hazardous materials and conducts 1,200 field responses statewide every year.

Anyone encountering oil or hazardous materials on Washington beaches should call 1-800-OILS-911.

The WCC crew that cleared the area from Moclips to Ocean Shores consisted of recently returning military veterans. The largest item removed by this crew was a refrigerator-freezer.

WCC Crew Supervisor Phil Hansen said: “Ocean Shores had the heaviest amount of debris in the north beach area. We had to make several passes along the same stretch of beach due to additional debris coming onshore.”

The crews found that residents, beachcombers and community volunteers have helped to reduce marine debris along popular stretches of beach. However, in less-visited areas, the debris was denser.

It is difficult to determine how much of the debris cleaned up by the crews is related to the March 11, 2011, tsunami that devastated Japan and claimed nearly 16,000 lives, injured 6,000 and destroyed or damaged countless buildings.

According to the National Oceanic and Atmospheric Administration (NOAA), a portion of the debris that washed into the Pacific Ocean has been arriving on U.S. and Canadian shores including Washington.

On June 15, 2012, a 20-foot fiberglass boat washed ashore at Cape Disappointment State Park. The Japanese consulate in Seattle later confirmed the boat was from Japan, swept out to sea by the 2011 tsunami.

NOAA predicts tsunami debris will show up on our shores intermittently during the next several years. However, it is unknown where and what types of debris might arrive.

Items from Asia, including buoys or consumer plastics, wash up on the Washington coast regularly. This makes it difficult to tell the exact origin of the debris without unique identifying information, such as a personal name or boat identification number.

About the WCC Program

In the past decade, WCC crews have responded to tornados, hurricanes, floods, wildfires, and oil spills.

Crews have undertaken a wide variety of response actions, including cutting and removing trees, brush and other hazards, operating shelters; and cleaning up damaged homes and buildings.

The WCC was established in 1983 as a program for unemployed or underemployed young adults. In 1994, the WCC received federal AmeriCorps funding and, in recent years, expanded to more than 35 locations across the state.

The WCC’s AmeriCorps members are young adults, including recently returned military veterans. Members receive job training, help restore and protect Washington’s environment, offer environmental education and volunteer opportunities for thousands of Washingtonians, and provide direct assistance to citizens of our state and across the nation during floods, fires, hurricanes and other natural disasters.

Young adults who complete a year of WCC service earn state minimum wage for hourly work and a $5,550 AmeriCorps Education Award that they can use for repaying student loans or toward future tuition expenses.

• Anyone encountering oil or hazardous materials on Washington beaches should call 1-800-OILS-911.

• Washington Department of Health believes it is highly unlikely any tsunami debris is radioactive. More at www.doh.wa.gov/

• It is possible that containers with hazardous materials such as oil drums or fuel canisters will wash ashore. Don't touch or try to remove the items. Call both the National Response Center at 1-800-424-8802 and state Military Department Emergency Management Division at 1-800-OILS-911 (1-800-258-5990). 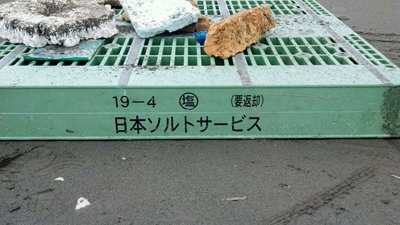 This pallet was found this week near Ocean City, Washington by Washington Conservation Corps crews. The writing is Japanese. The top line says, “19-4 (salt) (return required).” The bottom line says, “Japan Salt Service.” This could be a pallet that fell off a vessel, debris from Japan or elsewhere, or tsunami debris. The pallet is a good illustration of how challenging it is to track marine debris back to its source and event. Image courtesy Phil Hansen, Washington Department of Ecology.

OLYMPIA – The Washington Department of Ecology (Ecology) is deploying Washington Conservation Corps (WCC) crews to help respond to a reported increase of marine debris on the state’s coastal beaches.

The National Oceanic and Atmospheric Administration (NOAA) confirmed June 19 that a 20-foot fiberglass boat that washed ashore at Cape Disappointment State Park near Ilwaco was from Japan and swept out to sea by the March 11, 2011, tsunami.

There has also been an apparent increase in other items reported on Washington’s outer shores such as Styrofoam, plastic bottles and household appliances that also may be part of the estimated 1.5 million tons of tsunami debris deposited in the Pacific Ocean.

Ecology has committed the crews for four days to assess the extent of the debris and need for further removal efforts. WCC’s AmeriCorps members and staff will work with community volunteers and staff from the Washington State Parks and Recreation Commission to identify and remove debris.