PRESS RELEASE:Johannes Krieger, owner of Crystal Seas Kayaking and active member of the Marine Resources Committee, is the winner of the 2013 Good Village Steward Award for his work establishing the Spring Street Rain Garden. 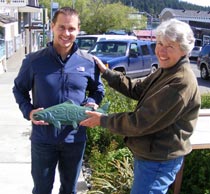 As is traditional, he was presented with the coveted "Finee" by the San Juan Islands Stewardship Network. Johannes was selected for his tireless work to bring about the creation and construction of a demonstration rain garden on the corner of 1st and Spring Streets in Friday Harbor.

The Spring Street Rain Garden is a collaborative partnership between the Town of Friday Harbor and San Juan County’s Marine Resources Committee (MRC) to keep pollutants out of the marine waters of Friday Harbor.

"While the town operates in an urbanized environment, that is not an excuse for failure to attend to the waters and the marine life that surround us", says Duncan Wilson, town administrator of Friday Harbor. "We need to find a harmonious balance between the activities of people and business, while preserving the pristine waters that make the San Juan Islands so special."

Storm water runoff is increasingly in the news as a toxic and troublesome source of pollution. The PBS Frontline Documentary “Poisoned Waters”, released in 2009, brought this source of pollution to national attention. Friday Harbor has a unique situation with steep, paved streets that channel road runoff directly into the bay.

Traditional methods of treatment, such as diverting the run off to a treatment facility, requires expensive infrastructure. Krieger became interested in helping address stormwater runoff concerns and, after identifying a potential funding source, he approached the Marine Resources Committee and the Town of Friday Harbor with a proposal to construct a rain garden in the downtown core.

"I saw this as an opportunity to get some essentially free outside money to bring jobs and work to our community during a period of time when we really needed it," says Krieger. “Additionally it would reduce the amount of pollutants going into our marine waters." The Marine Resources Committee approved moving the project forward, and helped apply for a grant from the Department of Ecology.

Krieger then began the process of getting the idea accepted by the public, and by the various councils, committees and government entities that were involved. He says that he tried to meet with lots of people, hear their concerns, and then address those with facts.

Bit by bit, the project moved forward. He gives a big shout out to Mike Carlson at Mike Carlson Enterprises, Steve Schramm at Island Gardens, Dan Drahn at Boundary Waters, King Fitch with the Town of Friday Harbor, Jennifer Rigg at Loea Designs, John Stevens at Atlantis Construction and many others, for their help with the project.

Krieger hopes there will be more of these projects in the future. Wilson points to the educational value of the garden for the tourists who travel here--particularly those who come from local places like Seattle.

"People who come here appreciate the beauty. The rain garden and its informational signage can help them learn, and to think about the water run-off in their own stormwater systems," says Wilson.

John Aschoff, chair of the MRC, notes that "This fits with the mission of the MRC to provide education about citizen stewardship of the marine environment." And that, along with making actual improvements to the environment, was the point in the first place. 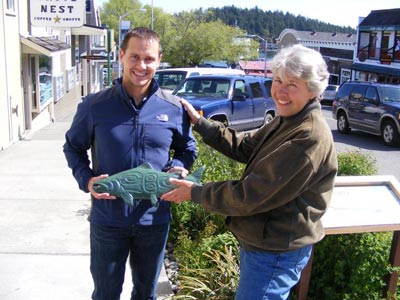