After a successful pilot run last year, Washington Sea Grant (WSG) is up and running with the first full season of the Crab Team, a citizen science program dedicated to detecting invasive European green crab and monitoring pocket estuaries, a favorite green crab habitat. The goal is to identify any green crab infestations early so that researchers and wildlife managers can take measures to reduce their impacts and prevent further spread. 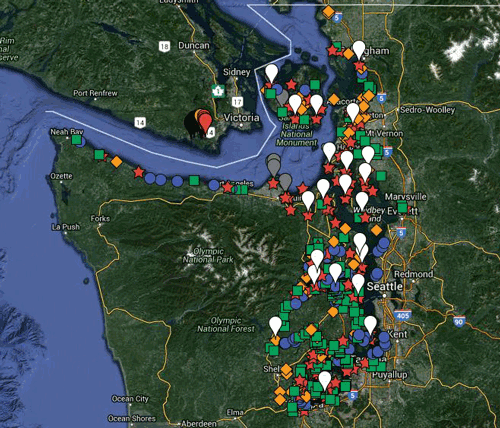 The European green crab (or Carcinus maenas, meaning “raving mad crab”) are native to the shores of the Baltic Sea and northeastern Atlantic Ocean. It is a small but highly efficient and adaptable predator and has wreaked havoc on coastal communities from South Africa and Australia to the Atlantic coasts. Since it’s arrival on the Pacific Coast of North America in the late 1980s, its presence has raised the same concerns here. In 2012, the first known green crab colony in the Salish Sea was discovered near Victoria, sounding an alarm for Puget Sound’s valuable shellfish beds and delicate coastal ecosystems. Green crab feed on a variety of organisms found in estuarine environments, including native shore crabs. Green crabs compete with native fish, shore crab and bird species for food, but their greatest impact in native communities is on the species of prey on which they feed.

The European green crab has been blamed for the collapse of the soft-shell clam industry in parts of Maine; some are concerned it might likewise affect native and commercial species in Puget Sound. Green crabs were first found on the West Coast in 1989, in San Francisco Bay. They soon spread south to Monterey Bay and north to Humboldt Bay, California, and Coos Bay, Oregon. They appeared in Washington after strong, warm currents unleashed by the 1997-98 El Niño along the West Coast appeared further north. Given that the last two years have had some of the strongest El Niño indices to date, monitoring efforts are more crucial now than ever. Eyes on the beach.

With an estimated 400 or more potentially suitable habitat sites in the Puget Sound and around the Strait of Juan de Fuca and the San Juan Islands, researchers are sounding a call to action for citizens to keep their eyes open for green crab while enjoying the beaches this summer. The best way for residents to help protect Puget Sound is to learn how to recognize green crabs and report any sightings. Green crab can thrive in a variety of coastal habitats and in wide ranges of temperature and salinity. In particular, muddy habitats such as salt marshes with deeply cut channels and sloughing banks have proven hospitable. A map of sites based on anticipated habitat value for the green crab can be found online. 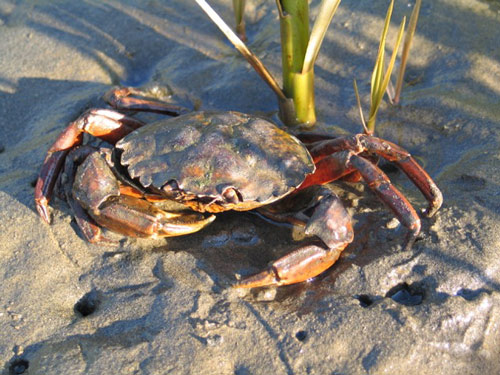 How to identify the green crab.

Don’t let the name fool you; the “green” crab’s carapace (back shell) color can vary widely. Several native Northwest crabs are also green. Adult green crab are about 3” across at the largest part of their shell, making them smaller than adult Dungeness and rock crabs. The European green crab is the only crab likely to be found with five spines along the forward edge of on the back shell from each eye to the widest point; native crabs either have more or fewer spines. Check out Identifying Green Crabs on the Crab Team website for more details on how to recognize this species.

See something? Say something!

Report potential green crab sightings to the WSG Green Crab Team by emailing mailto:crabteam@uw.edu. Attach any photos of the crab to the email. Take several pictures from different angles and distances to aid in confirming the identification. You will be contacted if any additional information is needed. Please be aware that it is illegal to possess a live green crab in the State of Washington without a special permit, so leave behind any crab you find. Under no circumstances should you harm or kill the crab.

For more information visit Washington Sea Grant’s website. This project has been funded wholly or in part by the U.S. Environmental Protection Agency under assistance agreement PC 00J29801 with the Washington Department of Fish and Wildlife. The contents of this document do not necessarily reflect the views or policies of the Environmental Protection Agency, nor does mention of trade names or commercial products constitute endorsement or recommendation for use.

Washington Sea Grant, based at the University of Washington, provides statewide marine research, outreach, and education services, helping people understand and address the challenges facing our ocean and coasts. The National Sea Grant College Program is part of the National Oceanic and Atmospheric Administration, U.S. Department of Commerce. www.wsg.washington.edu. 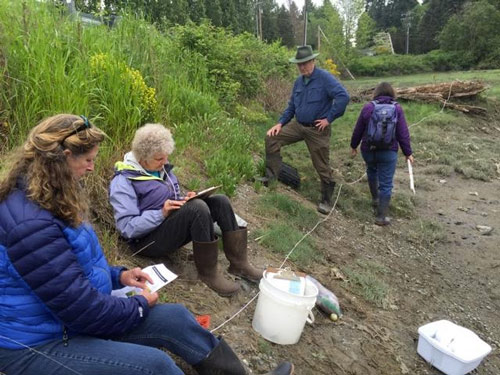 More in this category: « WA State Closes Beaches to Recreational Shellfish Harvesting - except in the San Juans Illegal seal pup pickups emphasize need to "Share the Shore" with wildlife »