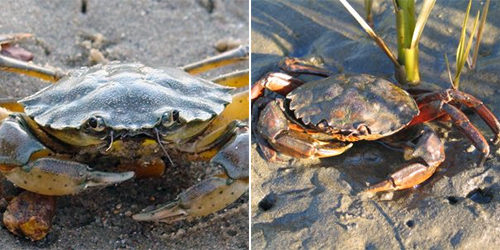 After the discovery in the San Juan Islands, a rapid response action to determine the size of the population and extent of spread was coordinated by the Washington Department of Fish & Wildlife’s (WDFW) Aquatic Invasive Species Unit. The response team was comprised of European green crab experts from Washington Sea Grant’s (WSG) Crab Team and supported by WDFW.

The responders thoroughly surveyed a two-mile radius around Westcott Bay over a three-day period and found no additional live European green crabs, but did find a single molt (cast-off shell). The findings indicate that there was likely more than one crab in the Westcott Bay Marsh, but that the invasive crabs are not yet firmly established.

This week’s sighting in Padilla Bay by Reserve staff member Glen Alexander was confirmed by WSG experts P. Sean McDonald and Emily Grason. “We were relieved to find very little evidence of a larger population of invasive European green crab in Westcott Bay,” says Grason. “But finding an additional crab at a site more than 30 miles away suggests that ongoing vigilance is critical across all Puget Sound shorelines. WSG’s Crab Team is committed to continuing the efforts of volunteer monitoring as resources allow, but we also rely on beachgoers to keep a watchful eye out for this invasive species."

The invasive European green crab is a prohibited species in Washington and possession is not permitted, but here’s how beachgoers can help:

1. Learn how to how to identify green crab. Check out the Crab Team webpage at wsg.washington.edu/crabteam or Facebook and Twitter @WAGreenCrab.

2. Take a photo and report sightings to the WSG Crab team at crabteam@uw.edu.

3. Shellfish collected in one location should never be released or “wet stored” in another location unless authorized by WDFW.

4. Clean, drain and dry recreational gear or other materials after beach visits.

McDonald goes on to say, “Once volunteers or the public raise the alarm, a trapping effort can be initiated. The situations in Westcott Bay and Padilla Bay are excellent examples of how an early detection and rapid response program should operate.” WDFW is responsible for managing and coordinating the response to the European green crab once detected. The agency reviewed recent sightings and initiated a rapid response in Padilla Bay, similar to the earlier effort on San Juan Island. Once completed, WDFW will coordinate a regional stakeholder meeting to discuss detection, response and other immediate management needs in light of the recent findings. 2016 is officially the last year of funding for WSG’s monitoring program, WDFW is seeking renewed funding through a 2017 legislative request.

Allen Pleus, WDFW lead on aquatic invasive species, explains that, “A broad coalition of partners is needed to effectively manage an invasive species, as is demonstrated by the rapid response trapping actions on San Juan Island and in Padilla Bay.” The response team received support from diverse community groups, including Roche Harbor Resort, the National Park Service, the San Juan Preservation Trust, the Padilla Bay NERR and other local stakeholders.

Scientists do not know how the European green crabs arrived at San Juan Island and Padilla Bay. Two likely pathways are that larvae were carried by warmer than normal surface currents from outside Puget Sound or people unintentionally transporting the crabs from infested waters.

This work was funded in part by the United States Environmental Protection Agency under Assistance Agreement PC 00J29801 to Washington Department of Fish and Wildlife. The contents of this document do not necessarily reflect the views and policies of the Environmental Protection Agency, nor does mention of trade names or commercial products constitute endorsement or recommendation for use.

Washington Sea Grant, based at the University of Washington, provides statewide research, outreach and education services addressing the challenges facing our ocean and coasts. The National Sea Grant College Program is part of the National Oceanic and Atmospheric Administration, U.S. Department of Commerce. www.wsg.washington.edu.