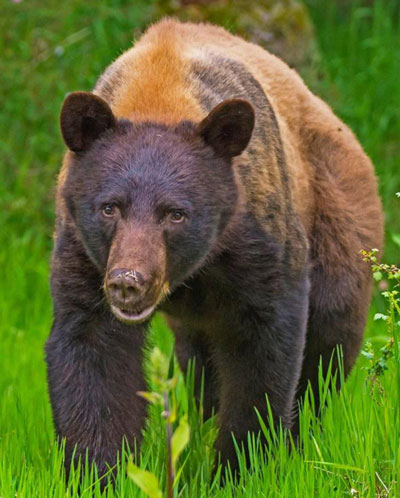 The black bear who has been visiting Orcas Island since Memorial Day weekend, has likely been trapped before, according to San Juan County Sheriff Ron Krebs. "He walks right past the trap and the food in the trap to lick a BBQ grease trap."

The Sheriff's Office has been working with the state Department of Fish and Wildlife. The plan is to trap the bear, take it to the Cascade Mountains and release it. The bear, estimated to be 5'2" and 250 pounds, is believed to have been on Lummi Island before swimming to Orcas Island.

Islanders and visitors are asked to lock up their garbage to avoid attracting the bear. Do not shoot the bear or you will be subject to a felony poaching charge. If you sight the bear please call the Sheriff's office at 360.378.4151.

More in this category: « June 24: Energy Opportunities for Woody Biomass workshop Bear caught, taken by ferry to the mainland »