Nineteen days ago 145,851 farmed atlantic salmon escaped from Cooke's fish farm at Cypress Island. In a recent article by SeaDoc Society Science Director Joe Gaydos, "Salmon Escape: What Does the Science Say?" explained the consequences of previous releases, the potential problems from this one and the unacceptability of having fish farms in the Pacific Northwest. 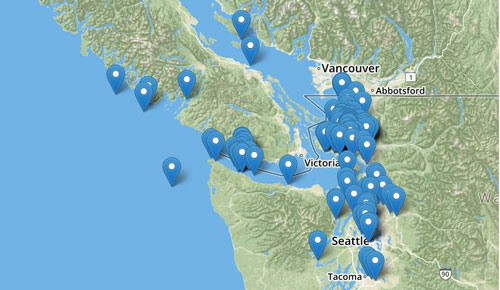 Washington Fish and Wildlife Dept. map showing locations where atlantic salmon have been caught. Click on link to view the map on the WDFW website. Clicking on each blue marker will show how many fish have been caught at that location.

The one potential upside of the released farm fish according to Gaydos, "...these farm-raised fish should serve as easy prey for seals, sea lions and eagles, maybe taking some predation pressure off wild salmon."

Other news regarding the fish release:

On August 24, 2017, in the wake of an environmentally disastrous event that allowed the escape of up to 305,000 Atlantic salmon into Puget Sound, Wild Fish Conservancy submitted a letter to Cooke Aquaculture Pacific, LLC providing sixty-day notice of intent to file citizen suit under section 505 of the Clean Water Act, 33 U.S.C. § 1365.

As has been widely reported, Cooke Aquaculture presided over the near-complete structural failure of a net pen facility located in Deepwater Bay off of Cypress Island over the weekend of August 19 and 20, the failure of which has resulted in, and continues to result in, the discharge of farmed Atlantic salmon, dead fish carcasses, and massive amounts of debris among other pollutants. These discharges represent blatantly negligent violations of the National Pollutant Discharge Elimination System (NPDES) permits under which Cooke Aquaculture’s Atlantic salmon net pens currently operate.

Crews continued dismantling the damaged facility. All outrigger and outside walkway sections were removed from the farm’s main walkway and staged for lifting. Some sections were lifted onto the work barge on Wednesday and all but three sections of the farm’s main walkway had also been staged for lifting and removal. Several anchors and associated bottom hardware had been recovered.

The predator net, which encircles the entire farm, had been secured and rigged for lifting on Thursday, September 7. Salvage divers were on standby for this operation.

Sonar services will commence for sea floor assessment shortly – this work will be carried out for marking and recovery of individual items.

The company’s final count on fish removed from the damaged structure is 145,851. This includes 5,166 fish that were harvested before the major damage occurred on Aug. 20, 2017. In addition, Cooke crews captured 388 escaped Atlantic salmon using beach seines under an emergency permit issued by the Department of Fish and Wildlife.

Daily water quality sampling shows no irregularities compared with ambient samples taken up and downstream from the site. These results are shared daily with the appropriate government agencies.