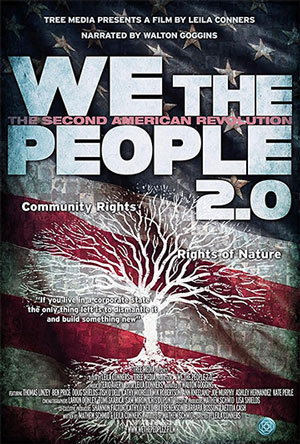 Can the democratic rights of communities and the rights of nature survive the exploitation of corporate interests? This essential question, and the answer, “Yes!” is at the heart of the film, WE the People 2.0 which will be showing at 7 pm  Thursday, February 22, 2018 at Brickworks in Friday Harbor.

The film explores the struggle for clear water, clean air, protected ecosystems in communities across our country, and the essential rights of the environment that are growing ever-more-critical around the world. (Movie trailer posted at bottom of page)

Kai Huschke, the Washington/Oregon/Hawaii Coordinator for Community Environmental Legal Defense Fund (www.CELDF.org) will be present to speak about this global movement to advance and protect the rights of ecosystems, such as the Salish Sea, through rights-based legal frameworks. Since 2006, along with their global engagement, CELDF has participated in developing first-in-the-nation, ground breaking laws to protect the rights of workers, the environment, and the comprehensive democratic rights of self-governing communities—as well as the rights of nature.

Hauschke will also be available to discuss specific legal issues impacting the preservation of our islands and the Salish Sea eco-system. To schedule a meeting and for further information contact: Kai Sanburn/360-468-4400, kaisanburn@gmail.com or Janet Thomas/360-378-3854, jthomas@rockisland.com

Key events in the development of the movement for the Rights of Nature:

In 1972, the Southern California Law Review published law professor Christopher Stone’s seminal article, “Should trees have standing – toward legal rights for natural objects.” Stone described how under the existing structure of law, nature was considered right-less, having no legally recognized rights to defend and enforce.

In 1989, Professor Roderick Nash, published The Rights of Nature: A History of Environmental Ethics. In it he explains how, throughout history, the right-less – slaves, women, others – have struggled to expand the body of legal rights to include themselves. Nash provides a context for how and why the body of rights is moving in the direction of expanding to include nature.

In 2001, Thomas Berry published The Origin, Differentiation and Role of Rights in which he described how all members of the Earth community possess inherent rights. In 2003, Wild Law: A Manifesto for Earth Justice, was published. Authored by South African attorney Cormac Cullinan, with Berry, he opens up a new front on the Rights of Nature – adding a significant spiritual and moral element to the legal and historic discussion begun by Stone and Nash.

In 2006, CELDF worked with the small community of Tamaqua Borough, in Schuylkill County, Pennsylvania, as it sought to ban waste corporations from dumping toxic sewage sludge in the community. CELDF assisted Tamaqua to draft a Rights of Nature law which banned sludging as a violation of the Rights of Nature. With the vote of the Borough Council, Tamaqua became the very first place in the United States, and the world, to recognize the Rights of Nature in law.

Since 2006, CELDF has assisted over three dozen communities in ten states in the United States to develop local laws codifying the Rights of Nature.

In 2008, CELDF was invited to meet with delegates to Ecuador’s Constituent Assembly that were tasked with drafting the country’s new constitution. At their request, CELDF drafted Rights of Nature constitutional provisions. In September 2008, the people of Ecuador voted in support of the proposed constitution, becoming the first country in the world to recognize the Rights of Nature in its national constitution.

In 2010, Bolivia held the World People’s Conference on Climate Change and the Rights of Mother Earth. CELDF was involved with drafting the Universal Declaration on the Rights of Mother Earth – which was released at the conference. It is modeled on the United Nations Universal Declaration of Human Rights. Following the conference, Bolivia submitted the declaration to the U.N. General Assembly for its consideration.

In 2010, the Global Alliance for the Rights of Nature was formed at a meeting held in Tamate, Ecuador. With founding members including CELDF, as well as representatives from organizations in Africa, Australia, and the Americas.

In November 2010, an ordinance recognizing the Rights of Nature – drafted with the assistance of CELDF – was passed unanimously by the City Council in Pittsburgh, Pennsylvania, as part of a ban on shale gas drilling and fracking. This the first major city in the U.S. to codify the legally enforceable Rights of Nature.

In 2011, the first Rights of Nature lawsuits were decided in Ecuador under the country’s constitutional provisions, upholding the rights of ecosystems. The first case, heard by the Provincial Court of Justice of Loja, featured the Vilcabamba River as the plaintiff. Thus, the river itself was able to defend its own rights to ‘exist’ and ‘maintain itself’ – as it sought to stop a government highway construction project that was interfering with the natural flow and health of the river. The court ruled that the project be stopped.

In 2012, Bolivia adopted its Law Under the Mother Earth and Integral Development for Living Well. Passed by Bolivia’s Plurinational Legislative Assembly, the law recognizes the Rights of Mother Earth in statutory law.

In 2012, a campaign was launched in India by Ganga Action Parivar and the Global Interfaith WASH Alliance-India to recognize rights of the Ganga River. CELDF is partnered with the organizations to draft the National Ganga River Rights Act.

In 2014, the Global Alliance for the Rights of Nature sponsored the world’s first Rights of Nature Tribunal in Quito, Ecuador. Subsequent tribunals have now been held, including in December 2015 at the U.N. climate change talks in Paris.

In 2014, the Colorado Community Rights Network proposed a state constitutional amendment which would authorize communities to establish the Rights of Nature in law. CELDF assisted the Network to draft the amendment, and is now working with Networks in Oregon, Ohio, and New Hampshire to take similar steps.

In February 2016, the Green Party of England and Wales adopted a Rights of Nature policy platform. CELDF assisted Green Party members to draft the provisions, which call for lawmaking to recognize legally enforceable Rights of Nature and elevate nature’s rights over corporate rights.

In September 2016, the General Council of the Ho-Chunk Nation in Wisconsin approved an amendment to their tribal constitution to recognize the Rights of Nature. CELDF was proud to work with Ho-Chunk tribal members to draft the amendment.

In 2016, Columbia’s Constitutional Court ruled that the Atrato River possess the rights to “protection, conservation, maintenance, and restoration,” and established joint guardianship for the river shared by indigenous people and the national government.

In 2017, Mexico City incorporated language into the city constitution which requires a law to be passed which would “recognize and regulate the broader protection of the rights of nature formed by all its ecosystems and species as a collective entity subject to rights.”

In 2017, the New Zealand Parliament finalized the Te Awa Tupua Act, granting the Whanganui River legal status as an ecosystem.

In 2017, the High Court of Uttarakhand in India issued rulings recognizing the Ganga and Yamuna Rivers, glaciers, and other ecosystems as legal person with certain rights.

In 2017, Lafayette, Colorado, in the U.S., enacted the first Climate Bill of Rights, recognizing rights of humans and nature to a healthy climate, and banning fossil fuel extraction as a violation of those rights.

In 2017, Colorado River v. State of Colorado was filed in U.S. federal court. In this first-in-the-nation lawsuit, an ecosystem is seeking recognition of its legal rights.