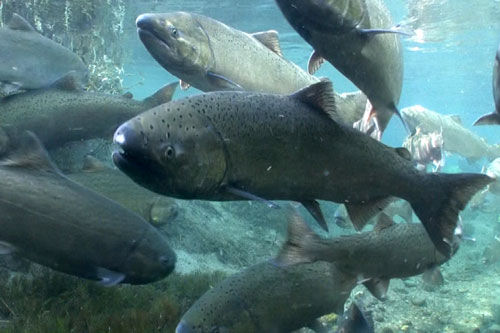 The Pacific Salmon Commission has reached an agreement on conservation and harvest sharing of Pacific salmon, which will serve to continue the longstanding partnership between the United States and Canada to cooperatively and sustainably manage salmon fisheries.

The Commission has recommended to the governments of Canada and the United States a new 10-year conservation and harvest sharing agreement under the Pacific Salmon Treaty.

Signed by Canada and the United States (U.S.) in 1985, the Pacific Salmon Treaty provides a framework for the two countries to cooperate on the management of Pacific salmon. Pacific salmon are highly-migratory, often spending years at sea and travelling thousands of miles before returning to their native rivers to spawn. A high degree of cooperation is required to prevent overfishing, provide optimum production and ensure that each country receives benefits that are equivalent to the production of salmon in its waters.

With the current harvest sharing agreement set to expire on December 31, 2018, Canadian and U.S. representatives on the Commission met regularly over the course of two years for extensive negotiations leading to the new 10-year proposal.

“It was gratifying to know throughout the negotiations that conservation of coastwide salmon stocks was the highest priority of every commissioner,” said NOAA Fisheries’ Bob Turner, U.S. Commissioner and current Chair of the Commission.

“I’m pleased the Commission was able to bring forward this recommendation, and that the Parties were able to reach an agreement that we feel will support the conservation and long-term sustainability of this important resource” said Rebecca Reid, Canadian Vice-Chair of the Commission and Regional Director General, Fisheries and Oceans Canada, Pacific Region.

The proposed agreement covers highly-migratory salmon stocks from Cape Falcon, Oregon in the south to Southeast Alaska in the north, including Pink, Coho, Sockeye, Chum and Chinook salmon.

Among the changes recommended by the Commission are new conservation objectives for several salmon populations, as well as a renewed commitment to science and stock assessment to inform decision-makers in both countries.

The proposed agreement also includes harvest reductions for Chinook fisheries in both countries that will help protect stocks while providing sustainable harvest opportunities for First Nations, Indian Tribes, and commercial and recreational fishers in both countries.

The proposed agreement has now been referred to the two governments for their legal review and ratification through formal diplomatic channels.

If approved, the new conservation and harvest sharing agreement will be effective on January 1, 2019 and remain in force through December 31, 2028.

For further information, please contact John Field, Executive Secretary of the Pacific Salmon Commission at field@psc.org or by phone at 604-684-8081 (ext. 622).

More in this category: « How you can help the rare Island Marble Butterfly Revenge of the mantids »