Lots of folks are commenting about seeing praying mantises on the island these past few weeks. Rumor has it they are an invasive species and they’re eating hummingbirds! While the part about them being non-native is true, I’m hoping to dispel some of the sensationalist hysteria about their presence on the island by offering an alternate perspective for you to consider. 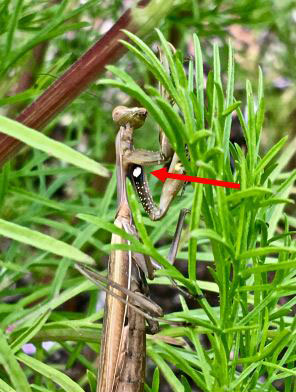 The mantids we are seeing right now are a species called Mantis religiosa. They were introduced from Ontario into the southern interior of British Columbia to control grasshoppers in 1937 and 1938 and have expanded their range, particularly since the late 1990’s. You can identify them by the presence of a black-ringed white spot on the inner base of the procoxa (foreleg).

This taxonomic feature helps differentiate them from the exotic Chinese Mantis, Tenodera aridifolia sinensis and the native Ground Mantis, Litaneutria minor which is found in Washington, but not on San Juan Island. Egg sacks for the European mantis and the Chinese mantis, and other mantis species are available online and at garden centers for purchase. Aside from releasing them to control agricultural pests, lots of people keep mantids for pets!

As to the mantids eating hummingbirds…

While reports exist across the world about various mantids capturing and eating hummingbirds, these are sparse, highly sensationalized accounts, most of them not occurring in the U.S. at all.

My literature search turned up a record in the Wilson Journal of Ornithology, published in 2017 where researchers compiled data in a table that shows records of hummingbird predation by Mantis religiosa (the ones “invading” the San Juan Islands) and for the ENTIRE U.S., there are only three substantiated reports, none of which occurred in the state of Washington.

Sensational to see a bug eating a bird? Perhaps, but if you are truly concerned about bird predation, what about outdoor kitty cats with sharp teeth and claws! 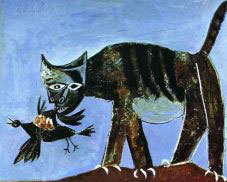 You may ask…but what about mantids eating our pollinators? Good question. My answer? It’s all about timing. Let me first tell you a bit about how the mantis develops.

The large mantids you are seeing now are adults. They are also at the end of their life cycle. In another week with a good cold snap, they will all die. After a last meal, a mated and fertilized female’s remaining energy will be spent producing a frothy egg mass which can contain up to 400 offspring. The mass hardens into a styrofoam-like ootheca, cemented in some cryptic spot where it will remain until spring if undisturbed.

In spring, mantid nymphs will emerge simultaneously from the egg sack. They are highly competitive and cannibalistic. Many of the hatchlings are eaten by siblings. Others who escape this predation, drift away in the wind or crawl through vegetation to disperse. A 1986 study by Hurd and Rathet found a 90% mortality rate for newly emerged nymphs in natural habitats.

The hatchling mantis nymph is a tiny replica of the adult. The species, Mantis religiosa completes up to eight or nine developmental stages (instars), shedding its exoskeleton (molting) each time, to reach maturity. When the mantis molts or sheds its skin, it has to hang upside down. During this time, it is extremely vulnerable, both to predation and to accidental injury. The mantis cannot fall from where it hangs or it risks becoming stuck in the old skin. With each stage of development, the mantis must find food and shelter and manage to evade predation by birds, reptiles, spiders, or even other insects like robber flies or dragonflies.

So, during spring and into early summer, the mantis is pretty small. Of the hundreds that emerged from the egg sack, only a few will manage to actually make it to adulthood. They may be able to prey on a few pollinators, but so do birds, reptiles, spiders…and dragonflies…and robber flies, and even certain wasps.

I did observe with my own European mantids kept as pets for about ten months, that flies were preferred pretty much over anything else. Unfortunately, the only way I could get them to eat yellowjackets was if they were really hungry, AND if I cracked the hard-shelled wasp open for them first. Mine were fed daily, depending on what I was able to catch. Some days food was pretty limited. Typically, they seemed fine with three or four flies or moths a day.

Their appetites increased as fall approached and I couldn’t believe my luck when I was able to net swarms of termites from an old stump a few evenings in a row. One of my mantids ate about 30 or 40 that night. A few nights later, I had an egg sack cemented to the window screen.

Unfortunately, a few nights after that, I found “Merlina” on the floor, a victim of feline squashing by a very overweight cat!

Back to the timing thing! Islanders pretty much didn’t even notice these mantids until late summer and early fall, right? And, if you saw them eating a bumble bee or some other sort of bee that isn’t a honeybee (which also happens to be non-native), then that bee (unless it’s a bumble bee queen) or fly or other insect is also at the end of its life cycle since it won’t live over the winter. The pollinators have done their job. The trees, garden plants, flowers, etc. aren’t in need of pollination anymore. Winter is around the corner. If the mantis catches and eats one of these, then to me, it’s just nature’s way of cleaning up.

Cynthia Brast has a M.S. in Entomology and Nematology from the University of Florida, Gainesville. She welcomes your bug photos and questions. You can read more and contact her through her bug blog at https://cynthiabrast.wordpress.com or community Facebook page at https://www.facebook.com/buggingyoufromSJI/