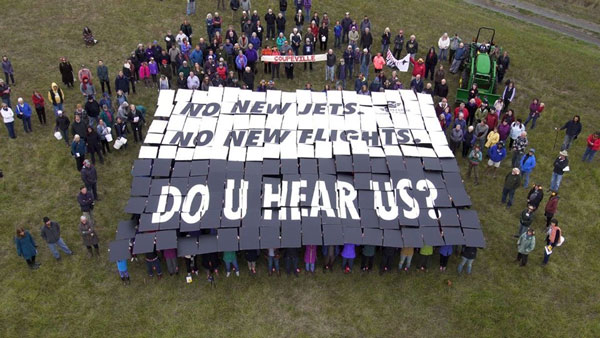 PRESS RELEASE: In an unprecedented move and over the objections of thousands of citizens and local, state and federal officials, the Navy formalized its decision to add 36 EA-18G “Growlers” to Naval Air Station Whidbey Island and to quadruple flight operations at Outlying Field Coupeville. Their flights begin March 18 with incremental increases.

In response, the Sound Defense Alliance has organized five events throughout Northwestern Washington to inform and engage the public. The public is invited to events in the following locations in Forks, Port Angeles, Port Townsend, Lopez and Anacortes. A Whidbey Island event is planned for April.

Maryon Attwood, Chair of the Sound Defense Alliance said, “In the past the Navy has been a good partner, but they are not listening. We have been good host communities for our military but we will not become collateral damage to an expansion directed from Washington D.C.”

Requests to reduce, mitigate, or even monitor noise have all been roundly rejected by the Navy who have ignored concerns from the Environmental Protection Agency, the Washington State Board of Health, the Washington State Historic Preservation Officer, the Advisory Council on Historic Preservation, Congressman Rick Larsen, Senator Maria Cantwell, and Governor Jay Inslee.

The Sound Defense Alliance is committed to continuing to work with elected officials and people across the state and nation to get the Navy to listen and to achieve an outcome that is balanced. This unfortunate expansion in Northwest Washington is balanced in one direction only — the military’s direction.

Although SDA reached out to Navy decision-makers, they steadfastly rejected any discussions, even walking away from negotiations regarding the region’s historic properties.

The Sound Defense Alliance is a new regional voice working to balance the conversation between military needs and civilian interests in our state. For more about the No New Jets. No New Flights campaign and SDA, go to: sounddefensealliance.org, https://facebook.com/SoundDefenseAlliance.