A black bear with a fondness for bird feeders has been sighted on Orcas Island Friday, May 10, 2019. Undersheriff Zac Reimer has been in touch with the state Department of Fish and Wildlife and they have sent a WDFW officer to Orcas Island. Reimer was told the bear is likely the same one that was on Camano Island and Whidbey Island the last few weeks. 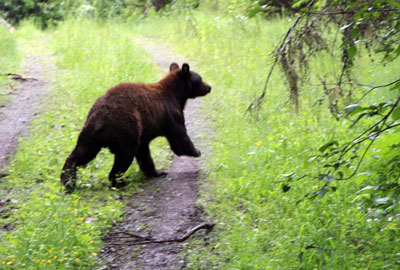 This photo is of the black bear that showed up on Orcas Island on Memorial Day Weekend 2017. It was finally caught and taken by ferry to the mainland on June 7, 2017. It was released in the Marblemount area near Sedro Woolley.  Photo courtesy of Sheriff's Office.

During the next few days, WDFW staff  will be looking at different options to deal with the bear. At this point the bear has not shown signs of aggressive behavior towards humans, but does like getting into bird feeders.

WDFW has information about black bears on their website. https://wdfw.wa.gov/species-habitats/species/ursus-americanus

Reimer encourages people to make reports to  WDFW so they can better track the movement of the bear.