Seventy stranded gray whales have been found on the West Coast of the U.S. so far this year. NOAA Fisheries has declared that the elevated rate of gray whale strandings is  an Unusual Mortality Event (UME). This declaration triggers a scientific investigation into the cause. 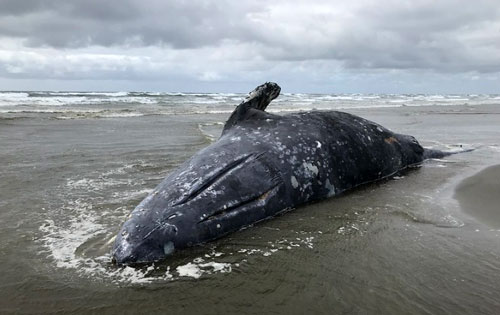 As of May 31, the numbers found were 37 in California, 25 in Washington, 5 on Alaska and 3 in Oregon. There have been five stranded in British Columbia and 73 in Mexico. In 2000, more than 100 whales stranded and an UME was declared.

Twenty necropsies have been performed so far.

Gray whales migrate from the arctic to Mexico. The stranding period is about March through June for most of the west coast. It extends through July for Washington state. Most of the whales stranded so far have been emaciated indicating the feeding season in the arctic was not optimal. In Washington state about 2/3 of the  stranded whales were juveniles and 1/3 were adults.

If you'd like to help, you can donate to the Marine Mammal Unusual Mortality Event Contingency Fund.