We come from all over the U.S. at the request of BLM-- San Juan Islands National Monument Outdoor Recreation Planner Nick Teague and the Terrestrial Managers Group. The volunteer spirit is alive and thriving in the islands, and there is no spirit more fired up than members of the American Hiking Society. AHS is based in the east and members hail from all 50 states . They backpack to week-long projects to mountains and deserts --or board a ferry to come to Lopez Island. 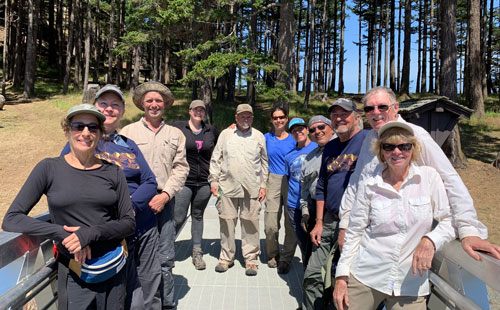 Cars loaded with camping gear flock to Odlin County Park, and Nick and the crew leader assemble pots, pans, coffee urns, maps, chairs, and firewood. Groceries are quickly stashed in coolers and a curious raccoon is chased away. By 6:00 pm over dinner, Nick unveils the details of the week’s tasks. Marcia deChadenedes, Monument Manager of the SJINM warmly welcomes the group. Their reputation has preceded their arrival each year since 2006. This crew will deliver –-- they always do and Marcia commends them for their spirited enthusiasm.

First day apprehensions melt away as the crew hears of how ‘easy’ work in the woods will be. Yet bets are off when deciphering Nick’s goals: “We’re after invasive plants, folks… Be careful as you dive in!” Sounds easy…It’s not. Quickly the undergrowth swallows up each worker and voices became faint. A large holly tree defies our small hand saws. Yet young English Holly, blackberries, and English ivy fall to the loppers. Regrouping, we lunch at Point Colville under an endless sky. Echoes of “ahhhh” ricocheted around the bluff. A brisk hike up Lopez Hill with San Juan County Land Bank stewards Amanda Wedow and Kayla Seaforth to do some trail pruning winds up a full day. Could the rest of the week possibly be as special as this?

Trails in Odlin South are worked over on Tuesday, a way for AHS’s happy campers to give back to the San Juan County Parks Odlin Manager David St. George’s gracious hosting of the crew. A project there, plus building a boardwalk at Shark Reef would complete the second day.

A sunrise ferry Wednesday whisks the team to Orcas Island, requiring a strong wake-up beverage in an Eastsound coffee shop. A meet-up with San Juan Land Bank stewards Eric Nelson and his coworker Peter Guillozet led to fanning out the length of the trail above Crescent Beach. Old fenceposts are removed, and after rolling up the weed-choked fence, Nick is egged on into crushing it flat. After a quick lunch and a swift clean-up of the beach, two eager “trail tamers” sprinted up Mount Constitution. The others ask simply “Is it naptime yet?”

Thursday morning: another before-dawn departure --- this time to Shaw Island to assist County Park manager Katie McLane. Affectionately known for her pampering of AHS volunteers, Katie’s treat is a homemade cobbler. The sweet sustenance is much appreciated as we sit and admire the expansive ball field. 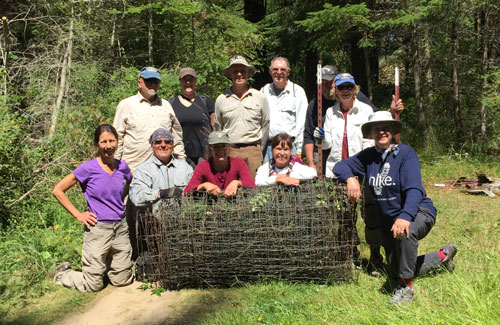 To earn it -- Katie gently advises—there’s a fence that must go, a campsite that has to be expanded, and a huge log that must be sliced up and off-loaded at the camp office. Who needs Pilates, after this kind of rugged work?

The Grand Finale: Washington State Parks Ranger Rick Doss pilots the team from Odlin’s dock on Friday on a breathtaking circuit of Lopez to James Island to tackle campsite cleaning and trail maintenance—all in a day’s work for this crew. All they ask for is astounding views.