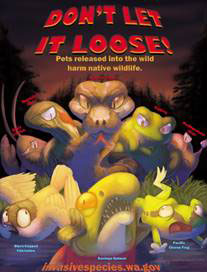 OLYMPIA–Calling all artists! The Washington Invasive Species Council invites artists of all ages to participate in an art contest as part of its “Don’t Let it Loose” campaign.

The campaign teaches people about the dangers of releasing unwanted pets and plants into the wild and highlights other ways to rehome them.

“Most people release their unwanted pets into the wild thinking it’s the humane thing to do, but, sadly, most of those pets end up dying in the wild because they aren’t adapted to this climate,” said Justin Bush, executive coordinator of the Washington Invasive Species Council. “Those pets and plants that do survive can go on to become invasive species.”

Invasive species are non-native plants and animals that cause economic or environmental harm and which could spread to new areas of the state. Invading species are able to out-compete and overwhelm local species, disrupting entire ecological systems.

“Prevention is the most effective and cheapest tool we have when it comes to managing invasive species, which is estimated to cost Americans more than $137 billion every year,” said Kaleen Cottingham, director of the Washington State Recreation and Conservation Office, which supports the Invasive Species Council. “By helping to spread the message of “Don’t Let it Loose,” artists will be joining the council in educating people that a seemingly small action can have a big impact on our environment and economy.”

The contest runs now through Aug. 9. Art should depict pets that pet owners might release into Washington’s waters, parks, and wildlands. Entries should convey that releasing invasive species can harm the state’s native plants and animals and include explanations or illustrations showing other options to rehome unwanted pets or animals.

The council is accepting a wide range of entries, including drawing, photography, dance, music and more. Winners will receive an award, ranging from stickers to gift cards, and have their entries displayed on the Washington Invasive Species Council Web site.

The full contest rules and inspiration are on the council’s website.

The council is asking the public to take the following actions to avoid releasing pets or plants into the wild:

· Research the lifecycles and specific needs of exotic pets before purchasing or adopting one.

· Contact the local science center, zoo or aquarium to see if they can use the animal for educational purposes.

· Dry and freeze unwanted aquatic plants and dispose in the trash. Do not compost the material.

More in this category: « WDFW offering up to $1K to encourage hunting on private property in San Juan and Island Counties State invests $25 million in removing barriers to migrating fish »