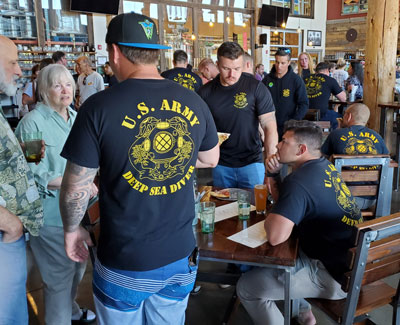 Twenty-one divers from the U.S. Army's 569th Engineer Dive Detachment spent most of July removing derelict fishing nets from the water off of the west side of San Juan Island. The divers dove to depths ranging from 70 to 151 feet during the 40 dives. One of the nets they pulled up was 500 feet long and weighed 4 tons. Executive Officer Max Krieg said they started out with three guys pulling up the huge net, soon they had 15 guys pulling and finally they ended up using a crane.

The divers were thanked by the Friends of the San Juans with a pizza party Thursday, July 25, the evening before they left. Company Commander Tyler Leroy noted if the detachment hadn't been removing the derelict gear in the San Juan Islands, they would have been training by retrieving items purposely thrown in. "It's really rewarding to do something real," he said. 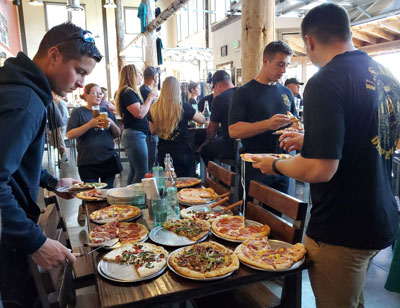 The soldiers stayed in Friday Harbor Suites during their stay on San Juan Island.

The detachment is headed back to Virginia for more training and to prepare for deployment set for next year. As of now, the plan is for them to deploy to Kuwait.