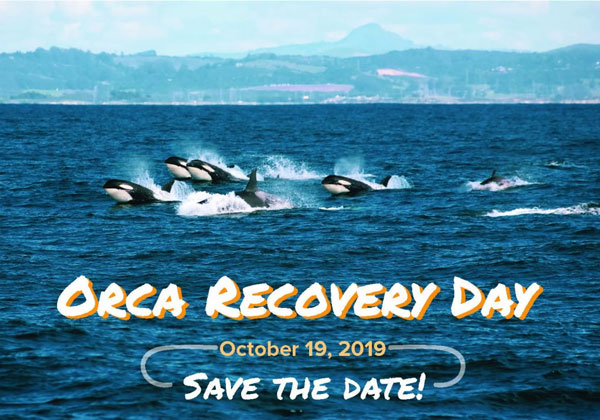 Volunteers are invited to participate in Orca Recovery Day on October 19. Conservation districts and other organizations across Washington State will host more than 40 events aimed at improving conditions for critically endangered Southern Resident Killer Whales.

Recent news of the presumed deaths of three Southern Resident Killer Whales (SRKWs) has added urgency to the need for large scale restoration efforts. Conservation Districts have joined with dozens of other partners across Washington State to host events that restore habitat, reduce stormwater pollution, and educate the public about things everyone can do to help save one of the most iconic creatures of the Pacific Northwest. Members of the public are invited to sign-up at one of over 40 events that are being held on October 19, 2019, as part of a statewide coordination of events known as “Orca Recovery Day 2019.”

From 11 a.m. to 3 p.m. at Cattle Point Interpretive Area on San Juan Island, participants will be removing invasive plant species and replacing them with native grasses and wildflowers to help create a healthier shoreline to support more robust insect populations that feed forage fish such as sand lance and smelt, giving salmon more food and therefore more food for the orcas. Please arrive on time to be welcomed by a tribal representative and stay for lunch/snacks plus updates from local researchers and representatives who will share the latest news about the SRKWs as well as further projects aimed to increase their chances of survival. Joined by: Friends of the San Juans, Center for Whale Research, SJ Preservation Trust, local Senator and Representatives invited.

The Southern Resident Orca Whales that call the Salish Sea (Strait of Georgia, Strait of Juan de Fuca, and Puget Sound) home are critically endangered. In the past few months alone, three more Southern Resident Orcas died, resulting in a current population of 73. Their numbers have been in steady decline. Recovery for the Southern Resident Orcas will take a coordinated and ongoing effort by all who reside in watersheds that provide habitat for the Orca's primary food source: primarily Chinook salmon, which are also endangered. Improving fish habitat will also support sport and commercial fisheries in Washington that have an estimated economic impact of $2.7 billion. These watersheds span every corner of Washington State and surrounding lands. Providing clean waterways that support fish health and overall improved water quality will benefit more than just the Southern Resident Orcas; doing so will benefit all life that call Washington State and surrounding lands/waterways their home.

All events are family-friendly and designed for anyone to volunteer in their local community. Event details and volunteer registration can be found at www.BetterGround.org/ord. People who are unable to volunteer may want to consider a donation to support conservation efforts at www.PromiseThePod.org.

Visit www.BetterGround.org/ORD to find more detailed information on Orca Recovery Day activities, a detailed interactive story map of the issues facing Southern Resident Orcas, and examples of things everyone can do to support recovery efforts.