A Snohomish County Superior Court Judge issued rulings Tuesday, October 8, 2019 in favor of the Land Bank on three issues and in favor of the Amaro family on one other. As a result the public can use the easement across the Amaro property to access a portion of the Mount Grant Preserve. 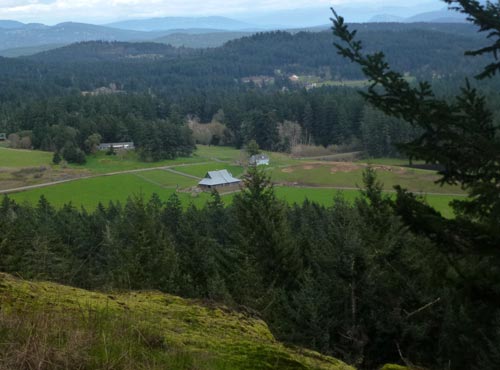 The easement was originally written to provide access to Lawson Ridge, a proposed 12-unit luxury residential development. When the lots didn't sell, the county Land Bank and Preservation Trust purchased the 12 lots plus some additional parcels and created Mount Grant Preserve.

The Judge ruled the Land Bank can allow the public to use the easement to access the 12 lots but not to access the other property in the preserve. The easement language restricted the use to only the owners, contractors and invitees of the proposed development.

The Amaro's attorney, Nick Power, argued that the general public was not included in the term "invitees."

The judge said, "When the county gets the land, they get the easement with it. Though originally intended for high end uses, the county is entitled to subsequent use."

The judge said the easement could not be used to access the parts of the preserve that were not part of the proposed development. That amounts to approximately 70 acres. It also excludes the trail to the Town of Friday Harbor property.

The judge dismissed the tortious interference complaint that was about the Land Bank purchasing a piece of property from Tommy Lawson that the Amaros and Lawson had been working on a trade for.

The judge declared moot an issue regarding a gate that had been removed and is allowing the county to take care of the matter of a fence that was placed in the easement in violation of the terms of the easement. He will dismiss that issue once the county takes care of it.

The other issue covered at the October 8 hearing in Everett regarded a taking. The judge dismissed that also.

The other matters in the case will proceed to trial.

Mark Johnsen, the attorney representing the Land Bank, said, "We're very pleased with the decisive rulings. We can live with the court decision on overburdening." He said the Land Bank would likely put up fences, gates and signs to keep the public from using the easement to access the 70 acres not covered by the easement.

Rami Amaro said, "There were clear legal errors in the decision to allow public use." She will decide soon whether to appeal.

Lance Amaro said, "The county told us we had nothing. With the judge splitting the mountain, we went from nothing to something."

More in this category: « What’s Happening at Beaverton Marsh Preserve? Want to Enjoy Your Garden Vegetables all Winter? »