BELLINGHAM – The steeply forested coastlines of Afognak Island, part of Alaska’s Kodiak Archipelago, seem at first glance to be pristine and unspoiled, its miles of deserted beaches being left mostly in the care of the island’s brown bears and Roosevelt elk. 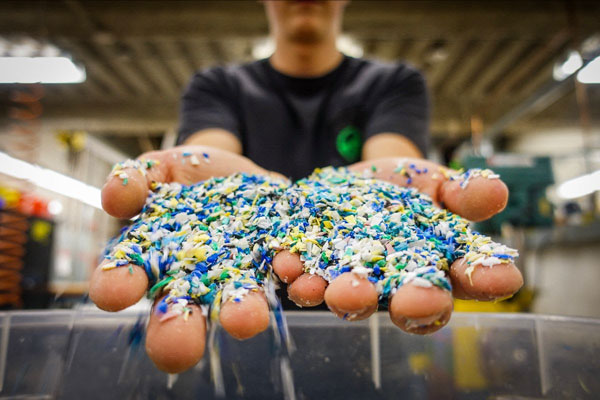 Ocean plastics from the Kodiak Archipelago in Alaska are gathered, cleaned, ground up, placed into new compounds based on plastic type and level of degradation, and melted and mixed in an extruder at Western Washington University in Bellingham, Wash. to form tough, elastic new plastics. Photo by Max Romney

Sadly, that perception is far from accurate, due to the island’s location along the North Pacific Gyre – an enormous ocean current swirling counterclockwise across the Pacific Ocean north of the equator which deposits hundreds of thousands of pounds of the world’s ocean plastics on Afognak’s beaches each year.

Western Washington University associate professor of Engineering and Design John Misasi and a team of his undergraduate students are working to understand how the world could best use these discarded plastics in the hope that proving their commercial viability could create a robust market for them that, at least as of now, doesn’t exist.

“Most ocean plastics that wash up on the shores of places like Kodiak have, in some way, degraded from their original chemical composition,” said Misasi. “But that doesn’t mean they don’t have value as recyclables. What we are trying to do is figure out how these ocean plastics, in their various degrees of degradation, can be broken down, mixed, and recombined into new compounds just as good – or better – than their original form.”

One of Misasi’s students, Christofer Owen of Sammamish, spent five days at Afognak in September as part of a beach cleanup effort funded by a grant through the Ocean Plastics Recovery Project, the Island Trails Network and the National Fish & Wildlife Foundation.

“I was excited to see firsthand the places where the plastics we have been working on actually come from, and the island is just as incredible as I thought it would be,” he said. “The beaches we cleaned up at first glance often looked quite pristine. But you have to go up over the lip of the high-tide line and into the woods to find all the plastics that haven’t just washed back out to sea.”

Fishing gear, nets, buoys, shoes, large and small chunks of Styrofoam … the beaches of Afognak had them all.

“We pulled 5,000 pounds of old nets off of Afognak’s beaches,” he said. “A storage container washed off a ship seven years ago that was full of plastic flyswatters, and some of them are still washing up on Afognak today. These things just don’t go away.”

Off the Island and Into the Lab

Misasi, Owen and WWU student Molly House of Auburn, like Owen a Plastics and Composites Engineering major at WWU, are focusing their efforts on building new compounds made from plastics washed up on Kodiak-area beaches.

“The plastics we are working with now actually come from a beach cleanup from Shuyak Island, right next to Afognak,” said Owen. “So their properties are very similar.”

According to House, the ocean plastics that wash up on the beaches of places like Shuyak have all been altered by their exposure to ultraviolet light and saltwater.

“What we’ve been doing is taking these plastics, cleaning them, grinding them up and then putting them into our extruder and then building new compounds from them to see how or if these new compounds made from ocean plastics can be incorporated back into new products,” she said.

So far, House said the results have been extremely encouraging, and have produced compounds using three major plastic types that were far more elastic and less brittle than compounds made from just one type of recycled plastic.

“Now we need to focus on making the process more scalable so that it can be used by bigger operations more efficiently,” she said.

Misasi said the work his students were doing could be the first step in a rethinking of how countries are dealing with their ocean plastics.

“Showing the worth of ocean plastics as a reusable item and then creating a robust industry niche for that plastic would be so important,” he said. “And these students are working towards that.”

House said plastics often get a black eye, both fairly and unfairly.

“But if we can figure out new ways to reduce and repurpose existing plastics instead of making new ones, that would be hugely beneficial and a big leap forward,” she said.

“We need to prove to the industry that we can reuse ocean plastics if they are handled and compounded in the right way,” he said.

Misasi said this was a critical component to why they are undertaking this effort.

“Ocean plastics have been viewed by the industry as a less valuable source of raw materials because they have been seen as often being too degraded to be re-used,” said Misasi. “And what we want to show is that there is a huge potential and unrealized niche in the industry to use these recyclables to create new products.”

For more information on the work of John Misasi and his students on Alaska’s ocean plastics, contact him at john.misasi@wwu.edu.