I still don't have an answer to what caused the loud boom heard on December 3 in the San Juan Islands. It wasn't a sonic boom, NAS Whidbey did not have any aircraft in the air at that time. The county's Dept of Emergency has no idea what is causing the sounds.

I have more calls out to try to gather information. If you've heard one of these mysterious booms, could you please email me the date, time, and location to me at sharon@sanjuanislander.com. Please put boom in the subject line. Thanks.

Tuesday night, December 3 at 11:33 p.m. there was a very loud boom that shook houses in the Yacht Haven, Roche Harbor area of San Juan Island. People reported hearing the sound in Friday Harbor and in the Pear Point area. 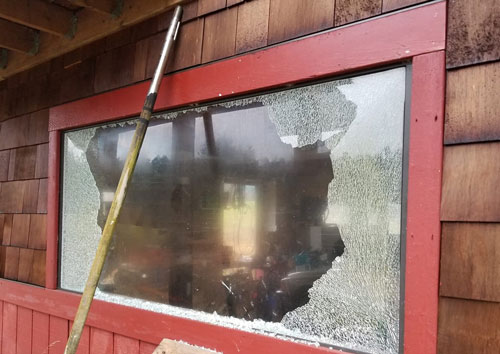 A resident living in the center of the island near the Beaverton Valley Rock posted this photo on Facebook showing damage he says was caused by the boom.

After receiving a call about the sound, San Juan Island Sheriff's Dispatch sent a patrol car out to look around. Nothing was found.

There were other reportings of a loud boom last month.

We've left a message with the PIO at NAS Whidbey to see if they can throw any light on the issue.

This article will be update if we're able to find out any information.