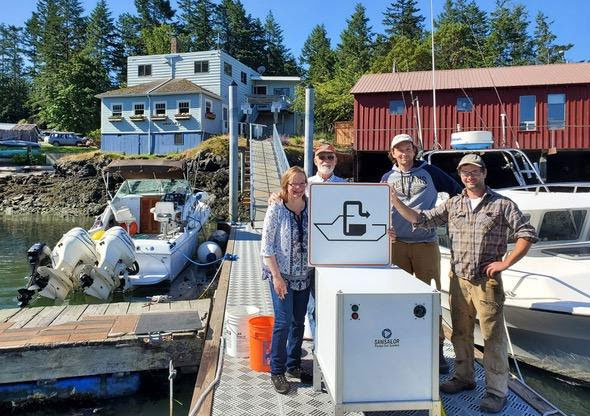 When boaters get out onto the water this boating season, they will find more pumpout stations to help them keep Washington’s waters clean from sewage spillage. Washington’s two newest pumpout stations can be found at Captain’s Landing on Shaw Island and at Seattle Boat Company’s SkyLaunch Marina on Lake Union. The pumpout at Captain’s Landing costs $5 to use, while the pumpout at SkyLaunch Marina is free. Both facilities can be found on the Pumpout Washington website. Check before you go to be sure the facilities are open.

Pumpout facilities are installed and maintained with grant funding from the Washington State Parks Clean Vessel Act (CVA) Grant Program. The program expanded the number of pumpouts in recent years to meet increasing boater demand for these types of facilities, such as the pumpout that was installed on Shaw Island last summer. Pumpout facilities allow boaters to offload their sewage quickly and safely, preserving the water quality of Washington waters.

With support from the CVA Grant Program, the Pumpout Washington team — a partnership between Washington Sea Grant and the Washington State Parks Boating Program to conduct boater outreach and education — is conducting a statewide inventory of public pumpout and dump stations to address common maintenance issues. The data collected through the inventory is being used to update an online map showing boaters where functioning pumpout facilities are located in Washington State. The information will also be used to identify areas where new boat sewage disposal facilities are needed. Boaters can help by reporting broken pumpout facilities to boatpumpouts@parks.wa.gov.

With the statewide re-opening of boating season launches, now is a good time to think about and prepare for best practices, such as properly pumping out. Last year, Washington’s recreational boaters did a tremendous job by diverting millions of gallons of sewage from coastal and inland waters by pumping out their boat holding tanks at public pumpout stations.

Pumpout stations also make it easier for boaters to comply with the Puget Sound No Discharge Zone (NDZ) ruling, which went into effect May 10, 2018. The ruling established Puget Sound and certain adjoining waters as areas where boaters may not release treated or untreated sewage from Type I and Type II marine sanitation devices (MSDs).

For over 20 years, the Pumpout Washington team has engaged with tens of thousands of boaters on the importance of properly disposing of their sewage. They have to date distributed more than 10,000 pumpout adapters to boaters, making it easier for them to empty their boat’s holding tank without making a mess. Boaters who would like to receive a free adapter kit, a Pumpout Washington pen-shaped hand sanitizer, or a clean bilge kit may reach out to Aaron Barnett, boating specialist at Washington Sea Grant, at aaronb5@uw.edu or 206-616-8929.

The Washington CVA Grant Program was established after Congress passed the Clean Vessel Act of 1992. The program is funded by the U.S. Fish and Wildlife Service through the Sportfish Restoration and Boating Trust Fund, which is supported by special taxes on recreational boats, fishing gear and boat fuel.

Even though marinas may be open, pumpouts and other amenities may still be closed, so check before you go and be sure you are safe. For more information or to find contact information for pumpout locations and mobile pumpout services providers in your area, visit www.pumpoutwashington.org.

More in this category: « Oil spill response base planned for Friday Harbor How to reduce your waste impact during COVID-19 times »