San Juan Preservation Trust article: We have just experienced a very exciting milestone in the San Juan Islands Western Bluebird Reintroduction Project! Fifteen years after the project first took flight, we have documentation of a Western Bluebird nest in a natural cavity of a Garry oak tree. Spotted by volunteer Dan Clingaman and photographed by Ross Lockwood, this bluebird family shows a move from artificial nesting boxes back into a natural breeding site. 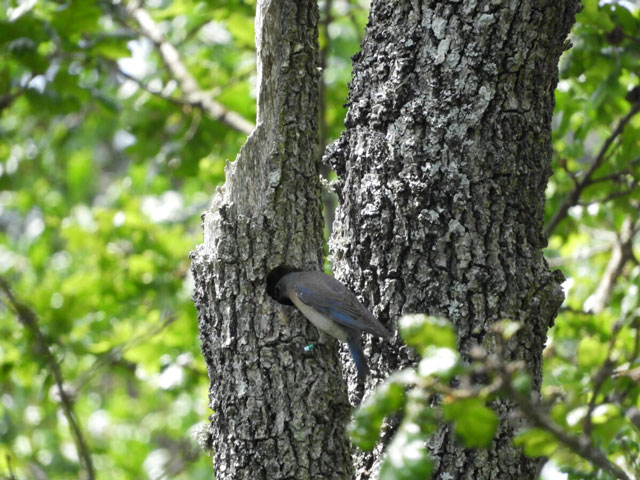 We’ve been waiting for this moment throughout the history of the project. It’s a HUGE and necessary step toward our goal of reintroducing a self-sustaining population of Western bluebirds to this part of their northern range. 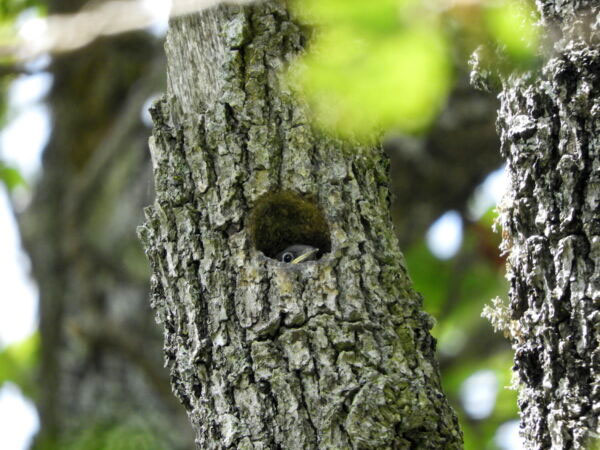 Bluebird nestling peers out of the oak cavity

In Ross’s photos, the female is feeding its nestling, the juvenile pokes its head out of the hole, and the male is also present and contributing to the parental responsibilities!

Western Bluebirds evolved alongside Garry oak trees. They have historically been tied to these prairie systems for centuries and have been the charismatic emblem of a disappearing habitat over the last 50 years. This documented cavity-nesting on San Juan Island highlights the original goals of the Western Bluebird Reintroduction Project: to tie the two species together and have the community understand the importance of oak habitat and the role these trees play, not only for bluebirds but for many other native species.

As we celebrate this adorable Western Bluebird family’s choice of temporary residence, it is the human community we must thank for this success. From elementary school students to seniors, the San Juan Preservation Trust has so many amazing people to thank for their time and dedication to this project. From helping set up aviaries, building nest boxes, and reporting sightings to Kathleen Foley Lewis, our Conservation Project Manager, these efforts played a major role in reaching this milestone.

Bluebird releases and nest-box placements were conducted almost entirely on private land. The dedication by private landowners to provide safe nesting locations makes a big difference in whether these birds can persist on the landscape. 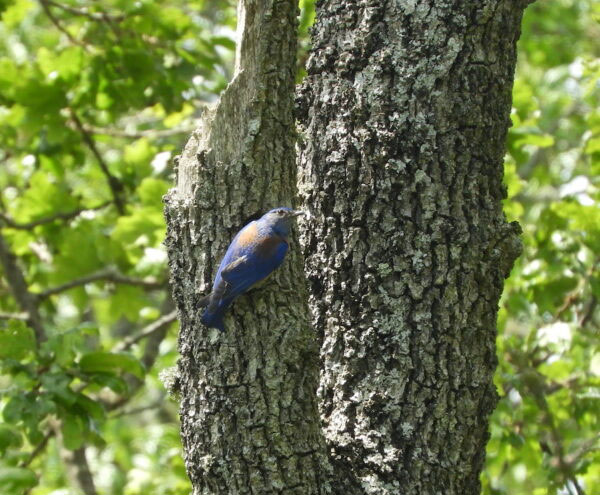 Male bluebird near the natural nest

Volunteer Dan Clingaman started monitoring a nesting box on a landowner’s property for the Preservation Trust last summer after retiring. His careful observations led to this amazing cavity-nesting discovery! He noticed that while the bluebirds were interested in the nestbox last year, they weren’t showing interest this time around and were spotted further north. He notified Kathleen and together they moved the nesting box north and set up a feeder, yet the birds remained uninterested and most of the sightings were on the adjacent property. Once he obtained permission to walk onto the property, Dan would go out almost every other day to spot the birds flying among the oaks.

But these sightings were not easy to come by! As Dan described, “I tried to follow their flight to a location where they might be nesting. I was unsuccessful as they were very elusive. I really wanted to find their nest for Kathleen, and also to show her I could do it.”

June 7 started out as a lackluster day. After Dan spent a disappointing and frustrating hour with no bluebirds in sight, he returned to his car.

“It commonly seems to happen that as I am getting ready to leave for the day, I spot the bluebirds,” Dan said. “That happened this day. I saw both the male and the female perching low in an oak tree nearby. It was a surprise to see them so close together in plain sight in one small area after six weeks of only brief glimpses of them flying among the oaks of the neighboring property. It was a shock when I observed them go to the opening of a cavity in the oak tree.”

“Through the opening I could see the heads and wide-open beaks of young birds. At first, I thought that the adults were attempting to drive away competitors nesting in their territory, but it was soon obvious that this was the bluebird nest and that those heads were baby bluebirds!”

“I sent a text to Kathleen, and we arranged to meet about an hour later at the territory. Ross accompanied her and photographed the bluebirds at the cavity. Kathleen confirmed that it was indeed a bluebird nest in the cavity of the oak and that the young were close to fledging. She told me that she had been working and waiting 15 years for the bluebirds to move their nesting from artificial to natural cavities.

“I felt and shared her feeling of tearful joy that the birds had found and nested in a natural cavity after so many years of relying on boxes,” Dan said.

The following day, June 8, Dan celebrated his 70th birthday. When he returned to the old oak, the young had fled the nest. “I was very fortunate to have spotted them the day before. The privilege of finding the bluebirds in the cavity was a true gift.”

“It is a gift that keeps on giving,” Kathleen added. “Thanks to Ross Lockwood’s getting such great photos, we have the opportunity to share this exciting event with the community.”

How You Can Help 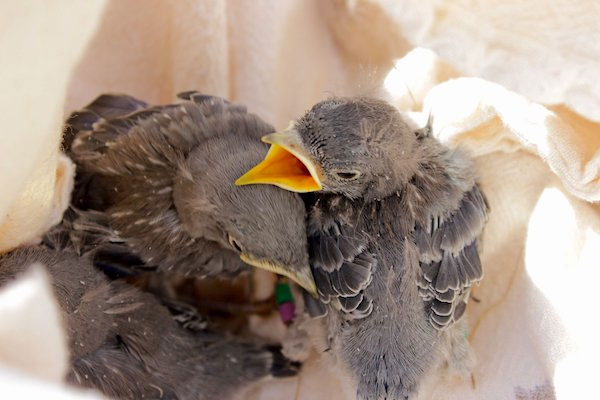 The San Juan Preservation Trust wants to thank everyone who has been involved with the Western Bluebird Restoration Project. We have much more work to do before this species can sustainably thrive in its traditional ecosystem.

Want to get involved? Here are some ways you can help:

If you see a bluebird, tell us by sending an email kathleen@sjpt.org to Kathleen Foley Lewis, SJPT Conservation Project Manager, who heads up the Western Bluebird Reintroduction Project. If you’re a landowner on San Juan Island with Garry oaks on your property and are interested in joining our project, please get in touch with Kathleen kathleen@sjpt.org.

No matter what island you live on, if you see a Garry oak with a dead limb or other features that may provide habitat for a nesting birds, please let it be. Your “benign neglect” could benefit scores of species that depend on oaks for their lives and livelihoods.