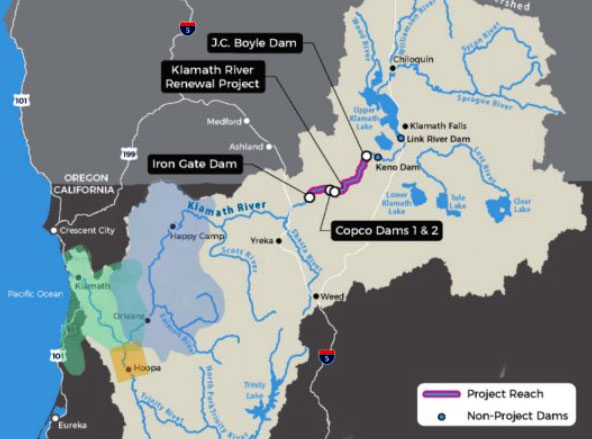 NOAA is celebrating a milestone in the decades-long Klamath dam removal process. The Federal Energy Regulatory Commission's approval of the License Surrender authorizes the decommissioning and removal of four hydroelectric dams on the Klamath River. Klamath Dam removal will provide over 400 miles of habitat currently blocked to migrating fish, including fall and spring-run Chinook salmon, coho salmon, steelhead trout, and Pacific lamprey. Dam removal will help restore the Klamath Basin ecosystem as a whole.

The Klamath River was once the third-largest producer of salmon on the West Coast, and is still an important source for many threatened native fish species. We are proud to be part of this restoration project and the largest dam removal project ever undertaken anywhere in the world. The decision sets the stage for dam removal in 2024.

During and after dam demolition, restoration and monitoring plans developed by state partners will help ensure a network of healthy habitat for the fish and communities that depend on the Klamath River and its tributaries.

Learn more about our work in the Klamath River Watershed here: https://www.fisheries.noaa.gov/.../klamath-river-basin