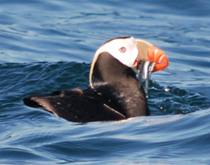 A study unveiled today, October 26, 2011, shows the number of species, in the Salish Sea which are threatened, endangered, or  candidates for listing,  has nearly doubled in the last two years. When last tallied in 2008 there were 64 species. Today there are 113.

In 2004 the US Environmental Protection Agency and Environment Canada adopted the metric as a transboundary ecosystem indicator, recognizing that the number of species listed is a crude measure of the health of the ecosystem. For scientists the list illustrates where cross-jurisdiction (State or Provincial/Federal) and transboundary (US/Canadian) collaboration is needed to recover declining species.

According to Nick Brown, the SeaDoc Society scientist who presented the findings today at the Salish Sea Ecosystem Conference in Vancouver, British Columbia, the dramatic increase is due to our increased understanding of the species that use the marine waters as well as a true increase in the number of species listed in the last two years.

Brown said "about half, or 26 of the 49 newly added species, were already listed and were added because we didn't consider them users of the Salish Sea until a recently published paper identified them.

He also pointed out "more importantly, 23 species including five fishes and 15 birds were added to the list because they were listed by one or more jurisdiction in the last two years."

Co-author Joe Gaydos said "even if we just consider the 23 newly listed species, this is the greatest jump seen since we began tracking this in 2002."

The list historically has climbed by 1-3 species per year. Gaydos pointed out that the increase in species listed is good in that it shows that the listing agencies are paying attention to species in decline, but bad in that it is an example of the slow decay of our ecosystem.

In light of projected increased population growth, on-going habitat modifications and expected climate change, Gaydos expects the number of listed species in this ecosystem to continue to increase and pointed out that it's time to increase efforts and "bring out our A-game to recover declining populations before it's too late."