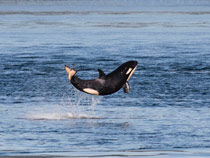 The Salish Sea continues to be a “pre-school” of sorts for the four youngest members of the Southern Resident Community of orcas.

According to crews from the Pacific Whale Watch Association (PWWA), J50, J51, J52 and L121 – all born since December 30th of last year – have been seen almost every day and by all accounts appear to be healthy and happy and, in some cases, putting on quite a show.

“I’ve never seen a baby whale breach like J50s been doing,” reports Michael Harris, Executive Director of PWWA, which represents 33 operators in Washington and British Columbia. ”Her energy is astounding – I guess not unlike my small kids. She’s constantly leaping into the air, and often curling up and doing belly flops. Of course we never know exactly why orcas breach, but when you see a young one do what J50’s been doing, over and over again, and being so playful and affectionate as she is with her family members, you sorta lose that cold scientific analysis and just conclude she’s leaping for joy. It’s definitely a joy to watch.”

Crews from Eagle Wing Tours in Victoria, BC had a memorable day with J50 on July 4th. After spending part of the morning with a humpback whale, a minke whale and J-Pod orcas, naturalist and photographer Clint Rivers and passengers witnessed an Independence Day aerial show unlike anything they’ve ever seen.

“J50 stole the show, and hearts, with more than 60 breaches as she and her family moved south in Haro Strait,” explained Rivers. “It’s like she just figured out how this breaching thing works and couldn’t stop. She was still breaching well into the evening!”

J50’s birth in December was a dramatic one. Earlier that month, J-Pod lost a female member while she was giving birth, dropping the population to 77 individuals, its lowest count in a decade. But two weeks later, the same group had another delivery – and this time, they made sure it went smoothly. Researchers believe that two members of the pod actually mid-wifed the birth of J50, pulling the baby out of its mother. The teeth marks can still be seen on J50’s back. 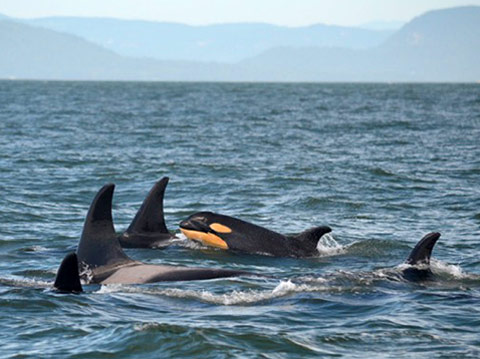 “Maybe all this exuberance somehow has something to do with that, this miracle birth,” said Harris. “Who knows? Maybe the other members of her family realize how precious she is, and how close she came to never making it into this world. Perhaps with all of this love surrounding her, this baby orca is just bursting with happiness. There’s no doubt that J50 feels safe and well-cared for, like all of these babies are. We have some amazing families out there.”

The “Class of 2015,” as whale watch crews are calling these Southern Resident orca calves, has buoyed hopes that the population, listed as endangered under the Endangered Species Act (ESA) and in Canada under the Species at Risk Act (SARA), have finally turned the corner. After almost three years without a successful birth, the local pods had a “baby boom,” with four calves born since December. Their numbers back up to 81, with an 82nd member, the L-Pod whale Lolita, now in Miami Seaquarium.

More in this category: « Rule of thumb – whales are bigger than kayaks NOAA monitoring J39, killer whale has fishing lure in mouth »