Mothers Day isn’t until May 8, but the biggest mother in these waters has brought whale watchers an early present. The humpback whale designated BCY0324 by Olympia’s Cascadia Research Collective, also known as “Big Mama,” was confirmed by Pacific Whale Watch Association (PWWA) crews Wednesday off San Juan Island, with yet another baby in tow. This is her sixth calf documented by researchers in these waters. 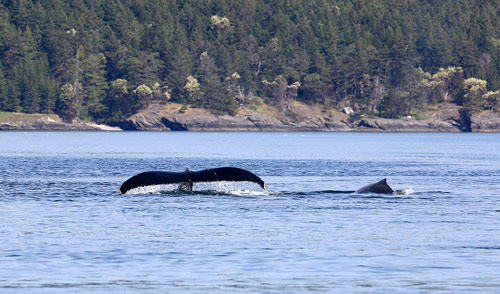 BCY0324 also was part of the first wave of the “Humpback Comeback,” the return of humpback whales to the Salish Sea after being extirpated locally by commercial whaling.

“Big Mama was the first humpback whale that I ever photo IDed, south west of Victoria near Race Rocks in 1997,” explained Capt. Mark Malleson, who also is a contract researcher for DFO Canada and collaborates with Senior Biologist John Calambokidis and his team at Cascadia in keeping tabs on humpbacks here. “She’s been seen returning every year since 2003 and in the last few years we have seen her expanding her feeding ground into the Strait of Georgia.”

“The ‘Humpback Comeback’ continues, and Big Mama keeps leading the way,” explained Michael Harris, Executive Director of PWWA, representing 36 operators in BC and Washington. “For whale watchers and researchers, it’s the gift that keeps on giving. Each year we report record sightings of humpback whales in these waters, and then we top that record the next year. We’re just a few months now into 2016 and it’s already a humpback highway out there – new individuals, showing up in new areas, doing things only humpbacks can do.”

And what they can do seems to defy physics – these “winged whales” (their genus Megaptera means “large-winged”) truly do take flight, hurling their massive bodies out of the water in acrobatic, full-body breaches, often taking whale watchers by surprise. Orcas and other whales breach too, but when a 50-foot, 50-ton animal does it, it’s more like a lift-off.

“It’s the marine equivalent of a moon shot,“ Harris continues. “Except when the old Apollo rockets lifted off, we got a countdown and watched the launch pad. With humpbacks, the water just explodes somewhere and a creature the size of a school bus suddenly takes to the air. It’s one of the most remarkable things in nature and we’re incredibly fortunate that we have a chance to experience it." 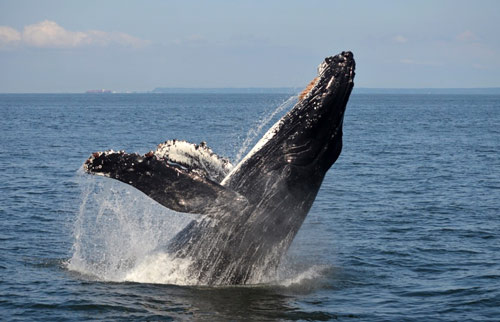 Each spring humpback whales migrate from Hawaii, Mexico and Central America to Alaska. Once hunted out in local waters by commercial whalers, humpbacks continue to resurface in astonishing numbers here, increasingly taking an inside passage through local waterways as they head north in the spring, and then south in the fall. But once in the Salish Sea, they often make it an extended stay before rejoining the migration.

“The number of humpbacks we’ve been seeing has been incredibly exciting. In just a few short years, the sightings of these giants have easily doubled,” explains Tasli Shaw, marine educator and naturalist for Steveston Seabreeze Adventures out of Vancouver. “It’s such a great opportunity for us to educate our passengers about these animals, how they’ve bounced back from commercial whaling, what they mean to the ecosystem. But it’s also a big responsibility to make sure we’re giving them all the space we can and keep them on that path to recovery.” 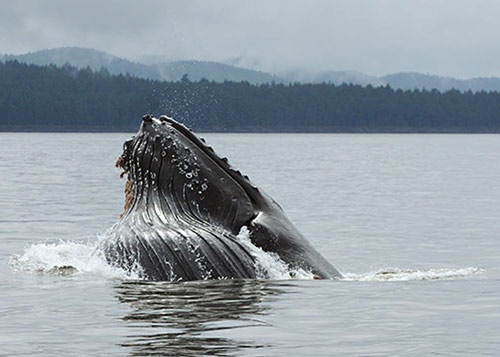 The resurgent humpbacks are giving environmentalists, researchers and marine mammal scientists an up-close look at an extraordinary conservation success story. Researchers believe there are more than 21,000 humpbacks now in the eastern North Pacific, up from about 1,500 when whale hunting was banned in 1966, and as many as 85,000 worldwide.

In the spring of 2015, after a five-year review, NOAA Fisheries proposed to delist most populations of humpbacks, including the ones we see in these waters. Cascadia Research Collective estimates that about 1,600 humpback whales feed off the west coast of North America, including as many as 500 now off Washington and British Columbia. These animals visit from spring to fall before migrating in the winter to warm-water breeding and calving areas in Mexico, Central America and Hawaii.

More in this category: « Are orcas protected from drones? June is Awareness month for Orcas »