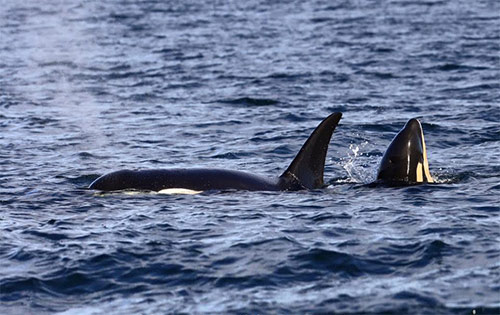 This is the sixth year implementing NOAA Fisheries’ regulations that require whale watching vessels and most other vessels to remain at least 200 yards away from the killer whales and to keep their path clear so they are protected from disturbance by boat traffic. NOAA Fisheries identified vessel traffic noise as one of three key threats to the whales. This year the Agency is reviewing how effective the regulations have been at protecting the whales.

Research has found that these endangered killer whales spend more time traveling and less time foraging when vessels, including small craft such as kayaks, are present, according to NOAA Fisheries’ 10-year report on the Southern Residents. These whales also change their behavior by increasing their activity at the surface, including swimming in more erratic patterns, when vessels are close.

“The whales are some of the best-known and most-loved wildlife in the Pacific Northwest, and seeing and admiring them can inspire conservation,” said Lynne Barre, killer whale recovery coordinator for NOAA Fisheries’ West Coast Region. “But we all need to take precautions so we don’t put them at risk in the process.”

The regulations and viewing guidelines are outlined and explained online at www.bewhalewise.org.

NOAA Fisheries has designated Southern Resident killer whales as one of eight “Species in the Spotlight” because they are a critically endangered species at high risk of extinction.

Last year OLE made contact with 40 private and commercial vessels while on patrol in the San Juan Islands. While many of the interactions focused on educating boaters about the regulations and emphasizing the importance of protecting the whales, officers documented eight violations.

OLE officers closely coordinate their patrols with the Washington Department of Fish and Wildlife (WDFW), which conducts similar patrols in the area. WDFW has a large presence on the water, supported by a NOAA Fisheries Endangered Species Act grant for the last three years.

“A big part of why we’re out there is to raise awareness and make sure boaters understand they need to keep their distance from the whales,” said OLE Assistant Special Agent in Charge Jim Houseman, who coordinates the patrols for the region. “If we’re not issuing citations that means people are respecting the whales’ space, and that is a very good thing.”

NOAA Fisheries also partners with the Soundwatch Boater Education Program, run by the Whale Museum on San Juan Island, to educate boaters about safe viewing as they approach an area with whales. Soundwatch also collects data on how boaters operate around the whales, which will help with evaluating the effectiveness of the regulations. Current data shows that recreational boats are the most common vessel type not following the rules, so boater education is key.

OLE has received some positive feedback from the whale watching industry about the benefits of patrol and education efforts in protecting the whales. Recently, however, both NOAA and WDFW have received increasing numbers of complaints about remote-controlled drones flying near Southern Resident killer whales. At this time, the Federal vessel regulations do not apply to drones, which are governed by other state and Federal regulations. For 2016, the Be Whale Wise guidelines have been updated to include recommendations for safe operation of drones near killer whales.