Some call Puget Sound “Orca Country,” but nowadays the seascape has changed. Perhaps it’s best to call these inland waters, “the American Serengeti,” home now to as many whale and dolphin species as there are terrestrial creatures in Kenya and Tanzania. 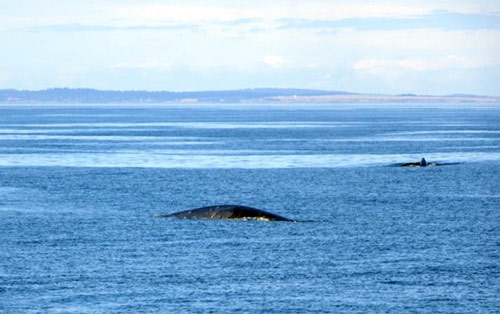 First, we had the “Humpback Comeback,” the return of humpbacks (Megaptera novaeangliae) to the Salish Sea after once being wiped out in these waters a half-century ago by commercial whaling. Then PWWA reported the surfacing last month of tropical/warm temperate common dolphins (Delphinus delphis) off Port Angeles, possibly the first confirmed sighting of the species in the inland waters of Washington state. Now we have another cetacean setting up camp here and capturing the attention of the scientific community, and this whale story may be the biggest yet.

On July 15, 2016 a few miles northeast of Dungeness Spit, WA a crew aboard the Chilkat Express saw and captured photographs and video of an adult fin whale (Balaenoptera physalus), the second-largest creature to ever roam the Earth behind the blue whale.

In September of last year, the same crew from Puget Sound Express Whale Watching were credited for the sighting of a juvenile fin whale south off Smith Island, later confirmed by Cascadia Research Collective of Olympia, WA, and Dr. Jonathan Stern, Professor of Marine Biology at San Francisco State University. It was the first confirmed live sighting of the species in Puget Sound since 1930.

Whale watchers dubbed the whale “Finnegan,” as in, “there’s that fin again.” True enough, for the next several months Finnegan was a daily forager off Smith Island, providing extraordinary opportunities to observe and study one of the marine world’s most fascinating and mysterious creatures.

“We’ve really been in one some amazing discoveries the last couple of years,” explains Capt. Pete Hanke, owner of Puget Sound Express, who’s been running whale watch tours for 30 years out of Port Townsend on the Olympic Peninsula. “First with Finnegan and now this new fin off Dungeness. It’s exciting, of course, but also a reminder that we have to give this whale a lot of room and continue helping researchers understand why it’s here and how we can protect it.”

A full-grown adult fin whale - between 60-70 feet and 70 tons - off Dungeness Spit. Photo by Capt. Mark Malleson, Prince of Whales Whale Watching, Victoria and Vancouver, BC

The sighting of this new visitor last weekend was confirmed by Capt. Mark Malleson, skipper for Prince of Whales Whale Watching in Victoria, BC, and contract researcher for Fisheries and Oceans Canada and the Center for Whale Research.

On July 9 Capt. Malleson came across what he believed to be a fin whale off Jordan River, about 43 miles northwest of Victoria. Once the crew of the Chilkat reported the fin sighting on the 15th off Dungeness Spit, they alerted Malleson and he was able to rush across the Strait of Juan de Fuca and find the whale, confirming it to be the same animal he documented off Vancouver Island, a full-grown adult estimated at between 60-70 feet long and 70 tons.

“This is like finding a brontosaurus in your backyard,” according to Michael Harris, Executive Director of Pacific Whale Watch Association (PWWA), representing 38 companies operating out of 21 ports in BC and Washington. “Mark (Malleson) and some of our people have seen fin whales off the outer coast and further west near the entrance of the Strait of Juan de Fuca, but down here in Puget Sound we only see fin whales when they come in dead on the bow of a freighter or tanker. Now we’ve had two years in a row where we’ve had fin whales set up shop here, and they seem to be getting plenty to eat. This is fascinating stuff.”

Whale watchers and researchers are still learning why Orca Country has become the American Serengeti, and what’s been drawing these rare whales and dolphins into the Salish Sea.

“There’s no question that ocean conditions are playing a big role here, but there clearly are overlapping factors,” Harris continues. “And some of those are quite positive. The populations of these large whales are rebounding, and a lot of that has to do with the banning of commercial whaling in 1966. Remember that whalers particularly targeted fin whales and humpbacks and they truly decimated the local populations, and otherwise imprinted on them that the inland waters here are inhospitable, to say the least. Whaling stopped and 50 years later we’ve seen the humpbacks recovered, delisted and now coming back and recolonizing these historic foraging areas. Perhaps with Finnegan and now this new sighting it’s an indication that fin whales are also returning for good.

“We’re hoping this big guy is the second fin in, with plenty more to follow.”

Malleson, who also assists Cascadia Research Collective in Olympia, WA on its humpback whale study, has had his logs full of fin whale sightings the last few years up in BC waters. In 2005 he reported seeing four different fins off Vancouver Island, the first documented sighting of the species in the inland waters of BC. One of those individual whales returned the next season. Last year, he also had opportunities to observe and document Finnegan as the fin made its way over to the BC side. This is now the sixth fin whale Malleson has documented in the last 11 years.

Fin whales can reach 85 feet and 75 tons and live up to 90 years. Listed as an Endangered Species in the U.S., they once were common in the Salish Sea.

EDITOR's NOTE: The original posting had the phrase "In U.S. Waters" it should have been "In Puget Sound". The article has been corrected.