After more than 14,000 whale watch trips and numerous encounters this summer and early fall with the Southern Resident Community of orcas, Pacific Whale Watch Association (PWWA) crews are reporting that the kids are alright – the “Class of 2015,” as the fleet has dubbed eight killer whale calves born into the endangered population last year, appear to be healthy, active and thriving. 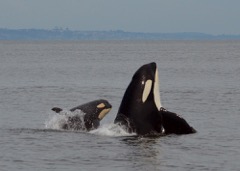 Before the baby boom came the gloom – grave concern arising from one of the lowest points in the history of the population. On December 4th, 2014 a pregnant 19-year-old whale named J32 or “Rhapsody” washed up on a beach at Comox, British Columbia, dead from an infection contracted while trying to give birth. The loss of this beloved, reproductive-age female and her unborn baby was like losing two whales in one day, and the Southern Residents appeared to be in a tailspin. Together with the loss in October 2014 of another young orca in the community, their numbers dropped to just 77 individuals, down one from when the population was petitioned to be listed under the U.S. Endangered Species Act (ESA). After 10 years and over $16 million USD spent by NOAA Fisheries on orca recovery, we were going backwards. Many believed that our region’s totem species were on an irreversible slide to extinction. Some of the most optimistic of researchers and advocates even lost hope.

And then there was J50. On December 30th, PWWA crews spotted a new calf, confirmed that night by the Center for Whale Research and designated J50, later nicknamed “Scarlett.” Her mother was determined to be J16 or “Slick,” a 42-year-old with six known births. J50 was thought to have been mid-wifed by her family, pulled out her mother’s womb by other members of J-Pod, literally willed into this world. Within days whale watchers reported the calf to be remarkably rambunctious, breaching frequently, almost as if she was celebrating her miracle birth. The iconic image (above left) of the newborn belly-flopping captured by Eagle Wing Tours Naturalist Clint “Showtime” Rivers would quickly go global, and in a way come to represent the elevated hopes of a planet of people for the recovery of our endangered Southern Resident killer whales.

Hope indeed surfaced. What would follow would surprise even the most optimistic of researchers and whale watchers – nine more calves born over the next 13 months: 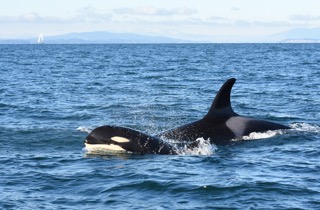 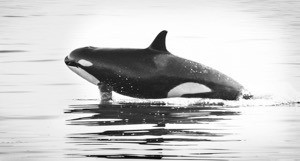 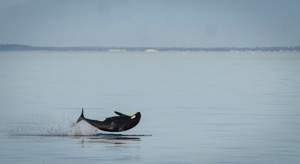 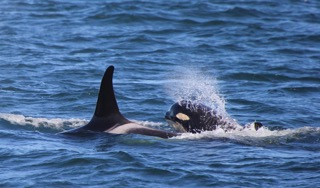 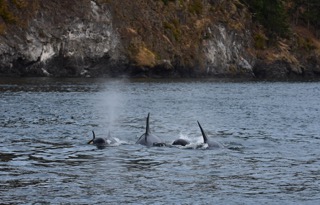 L123 or “Lazuli” is first seen in early November 2015 and confirmed in December 2016 – mother is L103 or “Lapis.” Photo by Naturalist Valerie Shore, Eagle Wing and Shoreline Photography 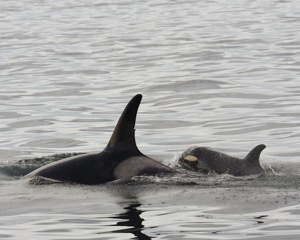 Had J50 been born a couple days later, the eight calves born to the Southern Residents would’ve been one short of a record for births in the population since Orca Survey began in 1976. Based on calculations accounting for all reproductive-age females, the Center for Whale Research estimates up to nine babies could be produced by the population each year, but with a high rate of neonatal and perinatal mortality the annual average has been three.

Last year’s baby boom wasn’t all bliss. On January 18, 2016 the Center confirmed a new calf, designated J55 and thought to be a few days old when it was sighted and in close proximity to both J14 and J37. Sadly, it would be the only time researchers would see the calf. The newborn immediately went missing and was presumed deceased. On the same trip, NOAA researchers also observed a dead, non-designated neonatal calf being pushed around by the female J31, who they believe may have been the mother.

Concern also has been raised this past summer about J28 or Polaris, who appeared to have a slight depression behind her blowhole, a “peanut head” that could indicate illness or food deprivation. Some speculated she was on her “last legs,” about to make her 10-month-old calf J54 an orphan. However, PWWA crews now report the 23-year-old to be looking much better and foraging normally, attending well to her duties as mother and, according to whale watchers, often seen “leading the way” with her natal pod.

All in all, conservationists are thrilled with the survival rate of the “Class of 2015.” The Southern Residents again appear to be bucking the odds. Consider the year they’ve had – a population down to just 77 animals suddenly has 10 known births over the course of a little over a year, after going more than two years without a successful birth, and now eight of those calves appear to be making it through the toughest patch of any killer whale’s life. Assuming the Southerns didn’t have any unsuccessful births during that time, that represents an 80% calf survival rate, extraordinary for killer whales in the wild. The age range of the orca mothers has also been surprising – J16 at 42 years old was thought by researchers to be one of the oldest to have a baby in the history of Orca Survey in the Pacific Northwest, while first-time mother J41 could be the youngest, just 10 years old when she had hers. Orcas usually start giving birth when they’re about 13 or 14. Even grandma had a baby – J17 or Princess Angeline, a 38-year-old member of J-Pod. This was J17’s fourth calf, and she’s grandmother to J46 and J47.

“Every time we had a baby born to this population last year, people got giddy,” remembers Michael Harris, Executive Director of PWWA, representing 38 companies operating out of 21 ports in BC and Washington. “And awesome as the news always was, I guess we sometimes had to be a buzzkill. We had to remind everyone that wild orcas have a 50% mortality rate out there, that half of these babies don’t make it through their first year. It’s a coin flip, we said. Well, now we can breath a little easier. We’ve got six calves who have passed that threshold and two more soon. Only two babies didn’t make it – they didn’t win that coinflip. But eight look great, growing like weeds. They are in no way out of the woods, we’ve got to get fish to these blackfish, but this is great milestone and real hope for the future of the Southerns. These whales never cease to amaze me. They are absolutely the most resilient and adaptive creature I have ever seen on this planet. They are survivors.”

"I feel very privileged to have the opportunity to watch these calves grow, and to get to know them on an individual level,” explained Heather MacIntyre, a Naturalist and Captain for Maya’s Legacy Whale Watching in Friday Harbor. “Their personalities – or ‘whaleanalities,’ as I call it – are totally unique, and always evolving.”

MacIntyre also remains hopeful for the future of the population – mostly because of an evolving consciousness among the public about what needs to be done to save these whales.

“It's frightening to think that their lives hang in a fragile balance,” she continues. “At a population of just 82, it's imperative that we remain vigilant in the conservation of their primary food source, (Chinook salmon) which is been on a dramatic decline for decades now. Things like removing the four Lower Snake River dams and supporting sustainable fisheries are incredibly important. If we remain proactive and considerate we might all be able to watch these calves grow up to live well into their nineties."

"Killer whales are an apex predator which means that everything in their environment, from the bottom of the food chain all the way to their prey near the top, impacts their survival,” explains Deborah Giles, PhD., Director of Research at the Center for Whale Research on San Juan Island. "The whales are smart; they know where to go to look for food. Our job is to make sure there are enough fish, most importantly Chinook salmon, available to them throughout their entire range, from Monterey California to Southeast Alaska. We also need to start taking substantial measures to protect and restore habitat that is essential to no only the whales but also to their fish prey at every stage of life – from eel grass beds used as nurseries for young salmon to inland river habitats needed by the salmon for spawning.”

HOW TO HELP: For all those who want to help the whales, become a Member of The Center for Whale Research! The Pacific Whale Watch Association is proud to be a longtime supporter of Ken Balcomb and his team. Help them help the whales. www.whaleresearch.com.