Evaluating anthropogenic threats to endangered killer whales to inform effective recovery plans, - a new study in Scientific Reports about the perilous status of the Southern Resident Killer Whales  (J, K and L pods looks at the impacts of environmental and man-made factors such as availability of Chinook, noise, pollutants, etc. It focuses on what can be done to ensure the survival of the endangered species: 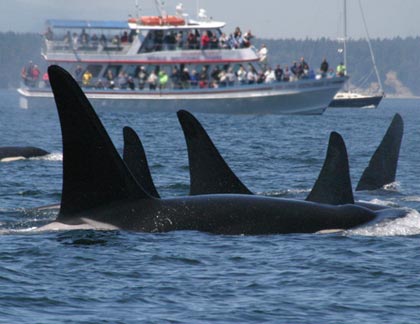 "Given our inability to manage some insidious threats, such as persistent organic pollutants that are already in the environment, it is reassuring that the model predicts that this stressor has the smallest adverse impact on the population, at least via the pathway of reduced calf survival.

The PVA can focus priority research on questions that make a practical difference. Studies of foraging efficiency under varying levels of anthropogenic disturbance are needed only because the population is prey-limited. If doubling Chinook salmon numbers were possible, and returning them to levels seen in the 1920s[51], consideration of other anthropogenic impacts on the whales’ foraging efficiency might not be necessary.

Alas, this is not a realistic scenario, and the model therefore points to the importance of including both improvement in prey abundance and reduction in noise as the more effective mitigation pathway.

Unfortunately, focus on only the immediate, tractable threats is all too common in conservation. For example, conservation of grizzly bears (Ursus arctos horribilis) in the continental United States focuses on roads and development activities, but the primary concern is that the species has been absent from most of its range since the 1800s[52].

Similarly, the current small size of the SRKW population was not caused by lack of salmon. The whales’ depleted status is due in large part to the legacy of an unsustainable live-capture fishery for display in aquariums[53]. Salmon, noise, and contaminants are important factors that can prevent recovery.

Many policies, including the US National Environmental Policy Act, require regulators to consider the effect of a proposed activity “which results from the incremental impact of the action when added to other past, present, and reasonably foreseeable future actions regardless of what agency (Federal or non-Federal) or person undertakes such other actions (40 CFR § 1508.7).”

Allocating impacts among multiple ocean user sectors may be difficult, but in the case study we present, the population is sufficiently imperilled that it has little or no scope for tolerating additional stressors."

The Seattle Times has published an article about the study - Orcas headed to extinction unless we get them more chinook and quieter waters, report says