As NOAA Fisheries gears up for another year of patrols to protect endangered Southern Resident killer whales in and around Washington’s San Juan Islands, the regional organization of commercial whale watching vessels, as well as state and county partners, have issued new guidelines to further reduce disturbance to whales from boat and vessel traffic. NOAA Fisheries identified these whales as one of eight species in the nation most at risk of extinction. 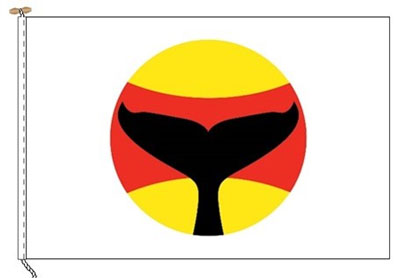 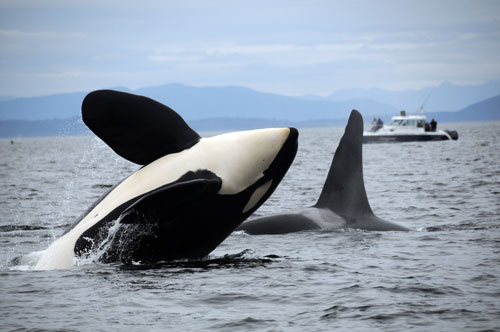 The new guidelines developed by the Pacific Whale Watch Association (PWWA) call for vessels to remain at least one half-mile from the light house at Lime Kiln State Park on San Juan Island and a quarter-mile from shore along the west side of the island from Mitchell Point to Cattle Point. Washington Department of Fish and Wildlife (WDFW) and San Juan County are also asking boaters to voluntarily avoid this same area, an expansion of the previous San Juan County Marine Stewardship Area.

Additional updates to the PWWA industry guidelines include a speed limit of no more than 7 knots within 1 kilometer or 0.65 mile of a whale, which go beyond the Be Whale Wise guidelines applicable to all boaters and paddlers.

Federal regulations adopted in 2011 require vessels to stay at least 200 yards from killer whales and stay out of their paths. PWWA has also adopted a 200 yard minimum approach distance for Southern Residents in Canadian waters. The federal regulations and the Be Whale Wise guidelines, which apply in both the United States and Canada, are outlined at www.bewhalewise.org.

“We’re in a position where we can be proactive, and try to be a model,” said Jeff Friedman, U.S. president of the PWWA, which represents 32 whale watching companies in the United States and Canada. “Hopefully other recreational vessels are going to catch on, too, and this will become more commonplace.”

He said the association decided to develop the new guidelines after NOAA Fisheries’ research showed that a boat’s speed, and not necessarily the size of its engine, is the main factor in determining how much noise it emits underwater. NOAA Fisheries has identified vessel traffic and noise as one of three main threats to the Southern Resident killer whale population. The other two main threats to the whales are the availability of their favored prey, Chinook salmon, and chemical pollution and contaminants.

“The new guidelines demonstrate that the whale watching industry is trying to do its part in reducing impacts to the Southern Residents,” said Lynne Barre, NOAA Fisheries’ Recovery Coordinator for the critically endangered killer whale population. She stressed, “there are fewer than 80 of these whales so the threats to their population compound each other making cooperation and partnerships essential to actions that will lead to their recovery.” 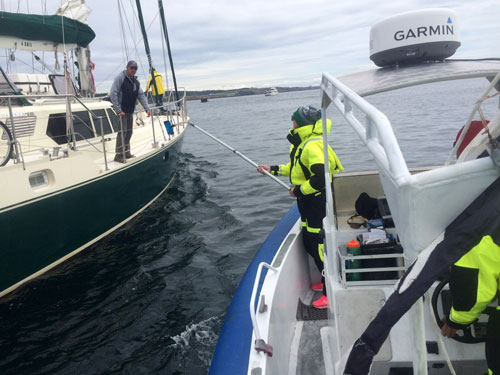 San Juan County and the Marine Resources Committee recently held public meetings to gather input on efforts that may contribute to whale recovery, which led to the county’s initiatives to increase protection of the west side of San Juan Island and new communication with the recreational boating community. They also are piloting a new Whale Warning Flag, which will be flown by vessels and select land stations when whales are in the area. The flag warns everyone on the water – boaters, kayakers, and paddlers -- that whales are close by so they can adjust their behavior to comply with Be Whale Wise guidelines.

At the same time, WDFW is providing new guidance and educational materials and asking boaters and fishermen to follow the Be Whale Wise guidelines and give the whales boat-free quiet space to forage along the west side of San Juan Island.

Washington Gov. Jay Inslee signed an executive order in March 2018 putting greater priority on protection for the Southern Residents and Chinook salmon and creating a Task Force to prioritize and support a longer-term action plan for Southern Resident recovery. The Executive Order also called for immediate actions such as a review of 2018 commercial and recreational fishing by WDFW, improved public education about vessel regulations and guidelines, and more enforcement. The Task Force, which met for the first time on May 1, includes working groups focused on developing strategies to address each of the main threats to the whales.

NOAA’s Office of Law Enforcement and WDFW have once again launched their special summer patrols starting this month in Haro Strait and around Washington’s San Juan Islands to promote compliance with the federal vessel regulations. A review completed last year found that the regulations reduced impacts to the whales by helping manage boat traffic around their popular summer habitat. The Soundwatch Boater Education Program, led by The Whale Museum in Friday Harbor, shares Be Whale Wise materials with boaters.

“It doesn’t matter whether we’re talking about respecting the whales’ space on the water, or being careful what you put down your drain at home that goes into the water, everyone can play a role in giving the whales what they need,” Barre said. “Immediate actions this summer and new actions that come out of the Task Force will build on the recovery program we’ve been working on for over a decade. It is encouraging to expand our existing partnerships, bring new people to the table and create new connections that will benefit the whales.”

READ MORE about Southern Resident killer whales and actions for their recovery. http://www.westcoast.fisheries.noaa.gov/protected_species/marine_mammals/killer_whale/