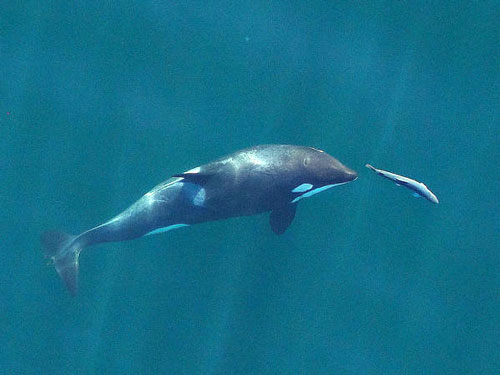 The list gives extra weight to salmon runs that Southern Residents have been documented as preying on, especially during winter when the whales may have a harder time finding sufficient food.

Biologists cautioned that this priority list should not be viewed as a hard-and-fast ranking, but rather as a relative and dynamic picture of which West Coast Chinook salmon populations are currently supporting the Southern Residents. The Southern Residents prefer Chinook salmon as prey, although they also feed on chum, coho, steelhead, and other species such as halibut and lingcod.

Focusing attention on species in need

Only 75 Southern Residents remain. This endangered population faces three main threats to their survival and recovery: lack of prey, vessel traffic and noise, and chemical pollution and contaminants. Given the high risk of extinction for these whales, NOAA Fisheries identified the Southern Residents as a "Species in the Spotlight" and created a special Action Plan to address each of the threats. Identifying priority salmon stocks for the whales supports the plan’s goal of targeting salmon runs that are critical to recovering the Southern Residents.

The first 15 salmon stocks on the priority list include fall, spring, and summer Chinook salmon runs in rivers spanning from British Columbia to California, including the Fraser, Columbia, Snake, and Sacramento Rivers, as well as several rivers in Puget Sound watersheds. The diversity of rivers reflect the variety of salmon stocks the whales encounter during their winter forays along the West Coast and during the summer months when they frequent the inland waters of the Salish Sea.

Like the Southern Residents, many of the Chinook salmon runs have also fallen in abundance and are designated threatened or endangered. Extensive habitat improvements and other recovery efforts on their behalf have been underway for many years.

Guiding habitat restoration and use of hatchery fish

Biologists from the two agencies developed the list to better inform recovery efforts for both the killer whales and the ESA-listed salmon runs, particularly when it comes to funding habitat restoration that can benefit both species. The prioritization may also inform efforts to use fish hatcheries to boost the supply of prey for the whales, although any adjustments must also account for the long-term sustainability of threatened and endangered salmon runs.

“We can use this information as a guide, based on the best science, to help inform decisions about how we spend recovery dollars for both salmon and Southern Resident killer whales,” said Chris Yates, Assistant Regional Administrator for Protected Resources in NOAA Fisheries’ West Coast Region. “We remain committed to recovery of all West Coast salmon stocks, and this helps us understand where we can maximize our resources and partnerships to help killer whales too.”

The National Fish and Wildlife Foundation cited the priority list recently in a new solicitation for proposals for a share of up to $800,000 dedicated toward killer whale conservation this year.

The NOAA Fisheries and the Washington Department of Fish and Wildlife model weighs salmon stocks based on how much their ranges overlap with that of Southern Residents. The model also incorporates the latest research identifying which salmon stocks the killer whales eat based on fecal samples and scraps of their prey collected by scientists. The model gives extra consideration to salmon runs that support the Southern Residents when access to food is limited, such as in winter when biologists know, based on aerial photographs, that some whales are underweight.

The model depended in large part on data from NOAA Fisheries’ Northwest Fisheries Science Center, where scientists have tracked the whales and studied their prey and diet for more than a decade.

This list is important to many partners who are diligently working to recover the Southern Residents and West Coast salmon runs. Salmon and whale biologists, managers, and recovery partners from the United States and Canada reviewed the model and the initial list at a workshop sponsored by the National Fish and Wildlife Foundation. The information was also shared with the Task Force established by Washington Governor Inslee earlier this year to prioritize and support a longer-term action plan for Southern Resident recovery.

Biologists noted that the priority ranking could change as they learn more about the Southern Residents’ diet and behavior.

“The goal is to apply what we’ve learned to protect and recover the whales, but we’re always learning more,” said Michael Ford, director of the Conservation Biology Division at NOAA Fisheries’ Northwest Fisheries Science Center. “The better we understand the Southern Residents, the better position we’ll be to advance their recovery.”