J-50 was followed for six hours Thursday, August 10 as J-pod swam from Canadian into U.S. waters. "It was dramatic how thin she is. She is just a very very skinny whale," said Marty Haulena, a veterinarian with Vancouver Aquarium. 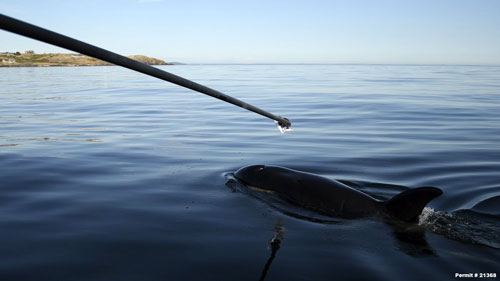 He was part of a team of veterinarians who are working with NOAA and DFO to help the emaciated three-year-old juvenile orca who is a member of the endangered Southern Resident Killer Whale population. 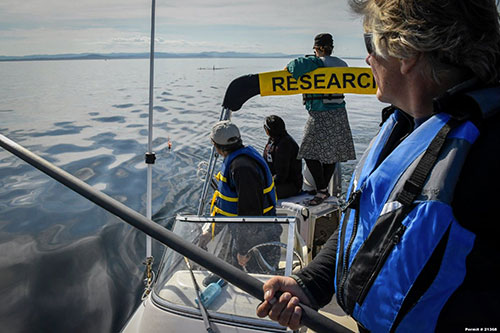 An injection of a broad-spectrum antibiotic was given via dart to the whale. Haulena said."It could have gone a little better. The injection went in but did not deliver the full dosage, probably half. There was a bit of a bounce." He did not want to use a collared needle because there were chances it would remain on the orca. The team of veterinarians which include some from SeaDoc Society and SeaWorld will discuss the pros and cons as the response activity continues.

The team was able to obtain breath samples which have been sent to labs. The tests look at microspora of the airways looking for bacteria and fungi.It will be several days before the results are known. Other treatments may be recommended based on the results.

During the six hours, the team was able to follow J-50, there were only two opportunities to give the injection.

After observing her diving and swimming with her mother and other members of the pod, Haulena says pneumonia now appears to be less likely to be the cause of the young whale's emaciated appearance. The researchers want to observe her eating and want to obtain a fecal sample to assess how well she is eating. They want to see if she does eat, if she vomits after eating.

The fish-feeding trial - live fish to be dumped in front of the whale - may help answer the eating questions. No final decision has been made when the trial will take place. One of the plans is to use fish medicated with antibiotics. The initial trial, if and when it occurs, will use unmedicated fish, according to NOAA Fisheries Biologist Lynne Barre.

More in this category: « Update August 9 on efforts to assess/medicate J50 Updates on J50: Still with her pod »