After 17 heartbreaking days, Tahlequah (J-35), the orca mother who captured the world's attention, has finally stopped carrying her dead calf through the Salish Sea off the Pacific coast of Washington and British Columbia. In response, Greenpeace USA released the following statement calling for greater efforts to protect endangered Southern Resident Orcas, of which only 75 remain. Scientists have also been tracking J-50, a 3 ½ year-old member of the same pod who is sick and at risk for an early death. 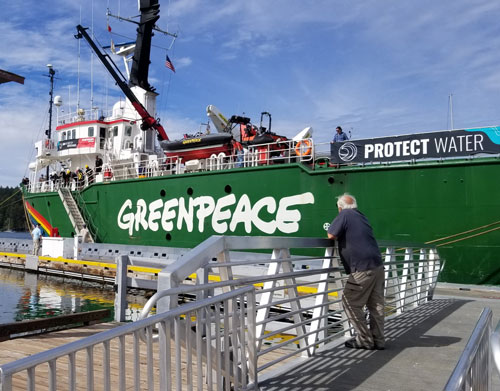 "For more than two weeks, Tahlequah united millions of people worldwide in heartbreak and love as she carried her dead calf for 1,000 miles," said Greenpeace USA Field Organizing Manager Ben Smith, a Seattle resident. "The Southern Resident Orca is an incredibly important part of the culture and history of the Pacific Northwest. Unfortunately, that population is malnourished and in dire need of food and protection. That is why our elected officials and civic leaders have a moral responsibility to take action and ensure that the orca's main food source, salmon, recovers and is not further depleted; that we don’t allow Trump to gut the Endangered Species Act; and that we aren't allowing projects like the Trans Mountain pipeline expansion to risk oil spills and tanker noise that threaten the Southern Resident Orca's ability to survive."

The report was released while the Greenpeace ship, the Arctic Sunrise, sailed the Salish Sea off the Washington coast near Seattle, Tacoma, Bellingham, and the San Juan Islands. The ship followed the route that would experience a seven-fold increase in tar sands tanker traffic if the Trans Mountain pipeline expansion is completed. While sailing this route, the Arctic Sunrise encountered a pod of orcas in the same area that Kinder Morgan assessed was a high-risk spill region, reaffirming the dangers that the pipeline represents to marine life. This also comes against the backdrop of news that President Trump wants to gut the Endangered Species Act.

Not only would an oil spill contaminate the waters in which orcas live, but it threatens the salmon population that they depend on for sustenance. Malnutrition and starvation are significant reasons that the Southern Residents are endangered. This problem is exacerbated by the ship noise, which interferes with orcas’ echolocation, the way in which they communicate with one another and hunt for food. Even without an oil spill, the noise alone from an increase in tanker traffic could mean extinction for these orcas.

The proposed Trans Mountain pipeline expansion project would increase seven-fold the number of tar sands tankers traveling from Vancouver, Canada, through the Salish Sea and down the Pacific Coast of the United States. The endangered Southern Resident Orca population could be driven toward extinction by the increased ship noise as well as the risk of oil spills and ship strikes resulting from the Trans Mountain pipeline expansion project

A map and analysis of 176 oil tanker and barge departures from the Westridge Marine Terminal in British Columbia from 2013 to the beginning of 2018 show that more than half (94) of those departures sailed the length of the Pacific Coast to the port of Long Beach, California, with significant numbers heading to destinations in Washington State (36), the San Francisco Bay Area (23), and various locations in Asia and Hawaii (17). These results indicate that while the physical pipeline may stop at the water’s edge, a diluted bitumen spill remains a risk for coastal communities all along the Pacific Coast — from British Columbia to Washington to Oregon to California.

Coastal communities that rely on fishing and tourism have suffered billions of dollars in economic damages following previous catastrophic marine oil spills. This is a major concern to Pacific communities. The $60 billion coastal economy of Washington, Oregon and California currently supports more than 150,000 jobs in commercial fishing and more than 525,000 jobs in coastal tourism. In fact, studies have found that a major oil spill in Washington would cost $10.8 billion, and one in Vancouver would cost $1.2 billion (CAD).

More in this category: « J-35 releases her dead calf NOAA tried to feed J50 off of the west side of San Juan Island »