As J50 swam in strong currents near Pile Point on the west side of San Juan Island Sunday, August 12, chinook salmon provided by the Lummi Nation were deployed through a tube into the water 100 meters in front of her. Response teams were testing to see whether she would eat the salmon and if fish could be used in the future as a way to provide antibiotics to the emaciated three-year-old killer whale. 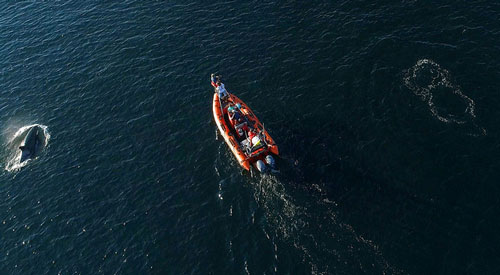 NOAA Fisheries Research Biologist Brad Hanson said, "We did not see her directly taking fish. We just saw her continue to buck into the tide." The fish may have gone past her too fast due to the strong current, he said.

Two other whales did eat fish, whether they were some of the eight fish deployed or not is unknown. 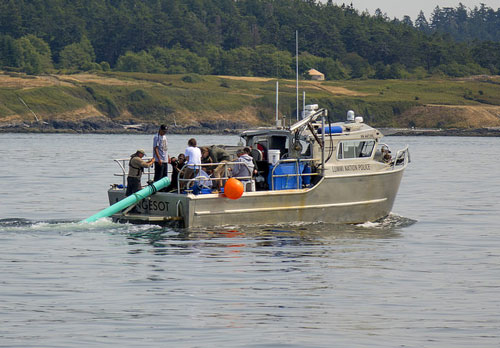 The Lummi Nation law enforcement vessel release live fish through a tube leading into the water during a trial feeding effort on Aug. 10, 2018. Photo by John Gussman/NOAA Fisheries, under permit 1878

Hanson said the trial was "logistically very successful. Boat driving by Lummi Nation was right on. This type of thing has never been tried before."

The boat operator kept the distance to about 100 meters in front of J50. That is the distance research has indicated the whales can detect the fish. The fish were not medicated.

Efforts to help J50, who is one of the 75 members of the Southern Resident Killer Whale population, were triggered earlier this summer by her appearance and a foul odor detected in her breath. The whale has always been on the small side, but her condition has deteriorated to the point she is exhibiting "peanut-head" syndrome.

J50 was observed on Saturday, August 11 and Sunday, August 12 in the Salish Sea near San Juan Island. The response team followed her for several hours on Saturday.

According to Hanson, she spent time both with her pod and away from her pod. "She  spent an hour swimming into the tide without making much progress, as other members swam by," he said. 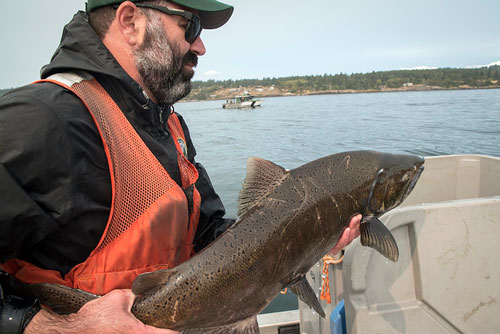 Edward Eleazer of Washington Department of Fish and Wildlife handles salmon aboard the Lummi Nation vessel participating in the live fish trials on Aug. 12, 2018. Photo: Katy Foster/NOAA Fisheries, under permit 18786

Two fecal samples were obtained over the weekend. Testing should show who the sample was from. It is from one of three whales - J50, her mother J16 or her brother J42. The larger sample is being shared by several labs. The smaller sample was only 2mm after it was spun according to Dr. Deborah Giles, whale research biologist for the University of Washington's Center for Conservation Biology. 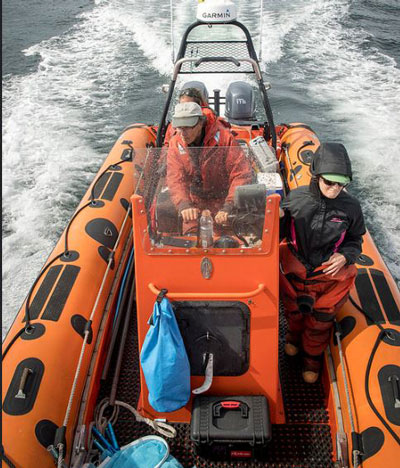 On Monday, August 13, J-Pod was sighted going west out of inland waters. At this time of year it is usual for them to be gone for up to a week. In the meantime, researchers from NOAA and the Canadian Department of Fisheries and Oceans (DF0) will review the situation and use data from the lab results to decide what actions, if any, to take next. A broad spectrum antibiotic was delivered through a dart last week. More antibiotic treatment would depend on the lab results, Hanson said.