Biologists observing J50, the  three-year-old female member of the endangered Southern Resident Killer Whale population,  noted she was remarkably active and engaged with J Pod despite her severely emaciated condition. 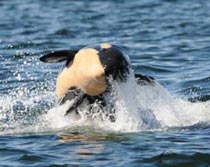 J50 Swanson Channel, off Pender Island, BC. when she was just a year old.

The young orca stayed close to her mother, J16, and continued the longer dives expected of healthy whales.

Veterinarian Dr. Martin Haulena of the Vancouver Aquarium provided J50 another dose of antibiotics through a dart, following up the initial dose administered on August 9, 2018. The initial injection only delivered half of the dosage as it "bounced" off the orca. A different type of syringe was chosen for the second dose.

The treatment priority has now shifted to administering a dewormer, also through a dart, to reduce any parasitic burden on J50’s system.

Tests of a fecal sample collected in August that came from either J50 or her mother or brother, showed signs of a parasite. The parasite isn't a problem except for animals in an emaciated condition.