Accusations flew in the emotionally-charged public meeting hosted by NOAA Fisheries at Friday Harbor High School Saturday, September 15, 2018. Angry men, women and a child shared their feelings and thoughts about the endangered Southern Resident Killer Whale population and berated NOAA staff for their lack of action. 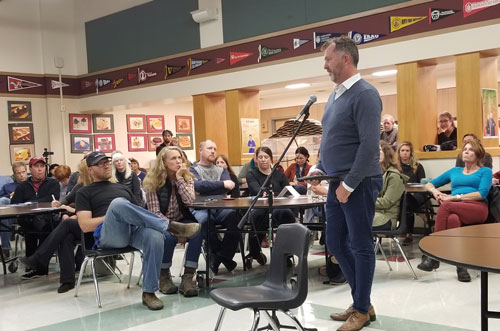 The meeting was originally set up for NOAA to listen to public comments on a proposed rescue plan for J50. Unfortunately the young female orca is now presumed dead as she hasn't been seen with her family for more than a week.

The potential plan could have included further intervention, such as a rescue operation and conducting a hands-on physical examination. That could lead to more in-depth diagnoses, rapid treatment, and return to the water or short-term rehabilitation and care to improve her chances of survival, with the ultimate goal of reuniting her with her family.

NOAA's two objectives to determine any further intervention to help J50 included providing appropriate conservation medical actions for J50 to protect her potential contribution to the recovery of the population, and avoiding harm to the rest of J Pod and the Southern Resident population of 75 whales.

A veterinarian from SeaWorld was part of the team of veterinarians that advised NOAA. Dr. Joe Gaydos from SeaDoc Society was also on the team. Lab work on the fecal and breath samples was conducted by SeaWorld.

At another meeting held at University of Washington on Sunday, September 16 comments echoed those shared on San Juan Island.

"I  am completely numb. I have been here three months." - A woman who traveled from the U.K.

"It's been a difficult summer for everybody. Especially us who are the eyes and ears on the water...Seeing on the water drastic changes...Number of trips with SRKW (where SRKW are seen)  is under 20 percent. I am very emotionally conflicted on intervention of individual whales...We need a big  picture long-term strategy...There are no other issues around them other than they need food." - Jeff Friedman, U.S. President of the Pacific Whale Watch Association

"Problem is not the boat noise, not the pollutants." - A woman

"Would you go to your refrigerator if it was surrounded by mines...Echo location to them are their entire senses." - Janet Thomas of Orca Relief

"I urge you to take drastic actions on behalf of the entire species." - Lovel Pratt, Friends of the San Juans

"We need the entire food system healthy from bottom to the top...We are all going to have to make sacrifices. We all have issues that can help them. We’ve allowed them to sacrifice their children and their mothers...As far as Seaworld I’d rather invite a rapist in my bedroom." - Michelle

Ken Balcomb of the Center for Whale Research mentioned how there used to be two million salmon and orcas were shot. He offered to provide information to NOAA. The government agency has a contract with the CWR for an annual census of J, K and L pods, the three pods that comprise the SRKW.

State Senator Kevin Ranker said, "We need to put politics aside and compromise aside...This is on all of us." He encouraged people to pay attention to the county's Shoreline Management Program and the county's regulations regarding spawning grounds.

Many people were irate at the thought of SeaWorld being involved in any way with NOAA's efforts.  Before the Sunday, September 16 meeting in Seattle, NOAA explained SeaWorld's involvement. The text is posted below.

SeaWorld veterinarians and biologists are among the most experienced in the world at caring for whales in managed care. SeaWorld has been a stranding network responder along the west coast, Gulf of Mexico, and along the Florida coast. SeaWorld also operates some of the world's most advanced diagnostic laboratories for assessing the health of cetaceans. These laboratories provided the results from fecal samples indicating that J50's mother, J16 likely carries parasitic nematode worms. That discovery led veterinarians to recommend J50 be treated with deworming medication, since the whales share prey. In this way,  SeaWorld's expertise and support have informed and improved the effort to treat J50.

While some may question  SeaWorld's role in this situation given its history decades ago of capturing killer whales from the wild, much has changed in 50 years.  SeaWorld has not been involved in captures in nearly 40 years, and has continued to increase its commitment to helping protect wild whales.

SeaWorld today responds to stranded animals as a member of the West Coast Marine Mammal Stranding Network, and has supported the recovery of Southern Resident killer whales through monetary, resource, and expertise support to the National Fish and Wildlife Foundation's Killer Whale Research and Conservation Program.

That has, as just part of the efforts, help restore habitat for Chinook salmon that wild whales rely on for food, and research to better understand and address the risks and threats to wild whales.

Additionally, some NOAA Fisheries scientists have examined whales at  SeaWorld to understand their physiology and how mothers may transfer contaminants to calves while they nurse, for instance. This provides important insight into the risks that wild whales face, and how we might better protect them.

As the recovery authority for endangered whales such as the Southern Residents, NOAA Fisheries directs and decides how the effort to support J50 will proceed.  SeaWorld and our other partners respond to requests from the J50 team in the field according to their expertise, providing support when and where it is needed. To help J50, the team needs the best expertise and resources available.  SeaWorld's support helps supply such expertise and resources.

Information about NOAA  Fisheries work to restore pacific coast salmon can be read here. According to NOAA, "With Pacific Coast Salmon Recovery Funding (PCSRF)  and the jobs that it creates, states and tribes have undertaken over 13,200 projects, resulting in significant changes in salmon habitat conditions and availability. As of October 2017, access to nearly 1.1 million acres of spawning and rearing habitat has been restored and protected for salmon, and access to over 10,550 miles of previously inaccessible streams has been re-established."

A summary of the efforts made by NOAA - including vessel regulations, salmon recovery efforts, collaboration with Puget Sound Partnership - can be read in the 5-Year Status Review.

NOAA streamed the two meetings on Facebook Live. They can be viewed on NOAA's  Fisheries West Coast Facebook page.

February 10, 2015: NOAA Fisheries announced a final rule that includes Lolita, a captive killer whale at the Miami Seaquarium, in the endangered species listing for the Southern Resident killer whale population.

Jan. 24, 2014: NOAA Fisheries announces a 12-month finding on the Lolita petition and a proposed rule to include Lolita as a member of the ESA-listed Southern Resident killer whale distinct population segment and remove the exclusion for captive members of the population.

Apr. 29, 2013: NOAA Fisheries accepts a petition to include Lolita in the ESA listing of Southern Resident killer whales

Dec. 17, 2003: As a result of a court challenge brought by original petitioners seeking listing status for the killer whales, NOAA Fisheries is told by federal court to reconsider process by which it determined ESA listing eligibility and to make new finding by Dec. 17, 2004

May 29, 2003: NOAA Fisheries declares Southern Resident killer whales "depleted" under Marine Mammal Protection Act and begins work on conservation plan for them, which is essentially identical to "recovery plan" that would be required if they'd been listed under the ESA

UPDATE: The video of the young girl from Blaine's remarks have been removed at the request of her father because the girl's manager hadn't approved.