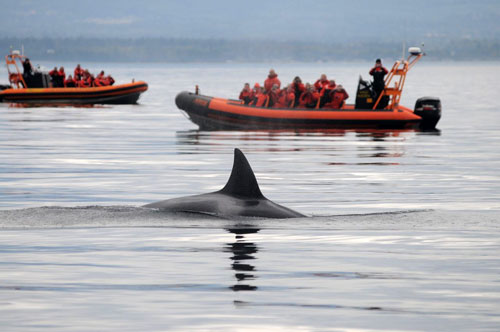 The National Marine Fisheries Service was notified last August that its failure to respond to the 2016 petition violated federal law. The proposal calls for a rule to exclude vessels from the orcas’ prime feeding areas, a designated “whale protection zone,” from April through September of each year to protect the orcas from noise and disturbance. A “no wake” speed limit would apply to any vessels exempted from the exclusion.

“These orcas are dying out and urgently need our help. Creating a whale protection zone in the heart of their habitat is a crucial step we can take today,” said Julie Teel Simmonds, an attorney with the Center. “Southern Residents need more salmon and better protection throughout their range. But let’s start by giving them the peace and quiet they need to find food in the Salish Sea.”

Southern Resident killer whales are starving because wild salmons run have been devastated by dammed rivers, streamside development and fishing. The missing orcas J17, K25 and L84 all showed signs of malnutrition before disappearing.

In addition to a lack of prey availability, the orcas are harmed by boat traffic and noise, which masks the echolocation they use to feed, navigate and communicate.

“The Southern Residents flourished in these waters for thousands of years,” said Janet Thomas, executive director of ORCA. “They are among the most intelligent marine mammals in the oceans of the world and are held sacred to indigenous peoples along the West Coast. They need their home back.”

Last year Gov. Jay Inslee’s Southern Resident Killer Whale Recovery Task Force recommended 36 measures to protect the orcas in Puget Sound, including vessel restrictions in orca habitat. The legislature ultimately only adopted a handful of the recommendations. Canada went further in May 2019, announcing that no vessel traffic would be allowed from June through October in three “interim sanctuary zones” in prime orca feeding habitat.

The Center for Biological Diversity is a national, nonprofit conservation organization with more than 1.6 million members and online activists dedicated to the protection of endangered species and wild places.

Orca Relief Citizens’ Alliance, a nonprofit organization based on San Juan Island, WA, has been working to save the Southern Resident orcas for more than 20 years.

More in this category: « SRKW population down to 73 orca Local initiative to increase distance between boats and whales loses in court »