PRESS RELEASE: It’s an old saying here among fishermen in the Pacific Northwest, dating back to the legends of the first people in the region, who saw the orcas that plied these waters not as animals but as “The Killer Whale People,” souls who lived in villages beneath the sea, who would put on their orca costumes and came to the surface, protecting humans from danger and, most important of all, bringing us salmon to eat. 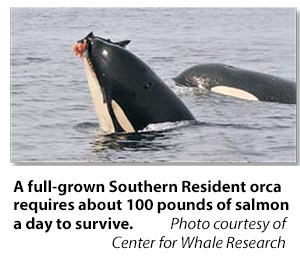 Today science tells us that killer whales don’t bring in the salmon; the salmon bring in the killer whales. And without healthy salmon runs in the Sound and Straits, particularly their preferred diet of Chinook salmon, we will no longer have orcas. Fish seems to be job #1 for any recovery plan. And yet, after a two-year study, an esteemed Independent Science Panel convened by NOAA Fisheries and Department of Fisheries and Oceans (DFO) Canada reported last year that there were "doubts about the cause-and-effect relationship between salmon abundance and killer whale vital rates."

With all due respect to these great minds and devoted public servants, the 31 member operators of the Pacific Whale Watch Association (PWWA) and some of the top orca scientists in the world disagree. Our federal agencies need to move now to restore salmon runs as a top priority for orca recovery.

On the U.S. side, NOAA has yet to curb the decline of the Southern Resident orcas, which now number 80 members, their lowest count in 15 years. And perhaps the most important source of prey for the orcas, the Fraser River Chinook runs, reached record lows this year – not surprisingly, researchers and PWWA crews reported a record low in sightings of Southern Resident orcas.

"The salmon are critical to the survival of coastal ecosystems,” says Anna Hall, PhD, Science Advisor for PWWA. “They are fundamental to the health and survival of resident killer whales – from what we know of their diet, the salmon are the number one important component. It seems clear that without the salmon, we stand to lose the whales. Salmon runs were down this past summer, and there were significant changes in the whales' distribution. It is probable that there was a relationship. The importance of working to successfully restore salmon populations cannot be understated. It is time for action – effective killer whale conservation means effective salmon conservation. No salmon, no whales. The math is simple and clear. What are we waiting for?”

"NOAA’s got a tall order recovering these orcas, no doubt, but when you look at these numbers and see where the focus has been, there’s a perception among some people that while Rome burns, our feds are fiddling,” said Michael Harris, Executive Director of PWWA. “We’ve lost a lot of critical time exploring new ways to regulate the whale watch industry – with no clear science to support that – and so far spent very little time on recovering salmon runs, with all the science in the world on that. When the petition was filed in 2001 to list the population under ESA, we had 78 whales, a drop of some 20% in less than a decade. Today we’re sitting at 80. Plus two in 12 years. That’s not orca recovery. That’s a ticking clock. We’re running out of time.”

Some orca scientists are frustrated by what they feel is a backpedaling now on the part of NOAA Fisheries on the correlation between Chinook and orcas – that ancient wisdom.

“This year, the whales spent far less time in the interior marine waters of Washington State and southern British Columbia than they have in recent decades, and we see from test fisheries that the Chinook numbers returning to the Fraser River system were at a record low,” explained Ken Balcomb, Executive Director and Principal Investigator for The Center for Research and a Science Advisor to PWWA. “It’s time to question the assumptions. I wonder if these same scientists now would have doubts that the alarming decrease of an important identified food resource in these waters had any cause and effect relationship with Southern Resident killer whale decrease in occurrence."

The PWWA will also be sending a letter to Canadian Prime Minister Stephen Harper and Minister of Fisheries and Oceans Gail Shea, urging the government to finally adopt a Marine Mammal Regulatory Amendment to protect the Southern Resident orcas, designed by Canada as a Species at Risk, that has been over 10 years in the making. In that Amendment are some of the strongest federal actions yet proposed by the Canadian government to address depleted salmon runs in BC waters.

(below) A full-grown Southern Resident orca requires about 100 pounds of salmon a day to survive. Photo: Center for Whale Research.

"We're studying these orcas to death. It’s time to act," added Harris. “And there are things we can do right now. Look at DFO finally ready to move on orca recovery, with a solid, science-based plan created by the Pacific Region Marine Mammals Coordinator, prioritizing real threats like pollution and prey resources.

"And when it comes to salmon habitat, we know that if we build it, they will come. Look at the treaty tribes here in Washington taking the lead, pushing through the Nisqually Delta Restoration project, ripping out the culverts, giving the Delta back to the Sound, bringing the salmon back there.

And then there’s the Lower Elwha Klallam leading probably the most important salmon restoration project ever, the removal of the Elwha Dams. Federal money, yes, but those huge, concrete fish killers would’ve never come down without the initiative and persistence of Native people working with NGOs and citizen groups to make it happen.

We’re still years away from completely restoring that river system, but just last week it was reported that the largest run of Chinook in decades have returned to the Elwha River. T

hey counted 1,741 adult Chinook and 763 reds, about 75 percent of those spotted upstream of the old dam site. They’re coming back, and that’s a candy store for resident orcas. I guess it took the tribes to remind us all of that ancient wisdom – no fish, no blackfish."

Ken Balcomb began the first Orca Survey here in Puget Sound in 1977. Over a decade of orca captures for marine parks removed some 45 resident orcas from these waters, with as many as 12 dying in the captures. Balcomb’s first count of the Southern Residents showed there were just 70 left in the population. They peaked at 99 whales but 1995, but began a precipitous decline that led to their ESA listing in 2005.

And with no fish this summer, PWWA crews saw the residents go on an extended food run, disappearing from the Sound and Straits for about a month, searching for salmon along the west coast of Vancouver Island. The San Juan Islands, where these whales are usually seen every day during the summer, became a Southern Resident ghost town. In his 36 years studying this orca population, Balcomb has never seen anything like it.

"They're showing no sign of recovery since being listed," explains Balcomb. “and with their occurrence in these waters now significantly diminished, my understanding of logic would suggest that we had better treat these facts as a wake-up call: the Southern Resident killer whales are perilously close to the point of no return, either as a viable population or as beloved neighbors.

“The time has come to maximize natural Chinook salmon recovery throughout the Salish Sea ecosystem, even if it means a serious review of the underlying analysis of management agencies."

The Pacific Whale Watch Association will be presenting a panel at the 21st Annual BC Marine Mammal Symposium on Saturday, November 23rd at the University of British Columbia. The discussion will include an industry report on sightings this past season, which was an eventful one – huge numbers of gray whales in the spring, record local humpback whale sightings and unprecedented behaviors, a near-record number of sightings of marine mammal-eating transient orcas, an extremely rare visit by Northern Resident orcas off Victoria, and of course the disappearance of Southern Residents.

HOW TO HELP: For all those who want to help the whales, become a Member of The Center for Whale Research! The Pacific Whale Watch Association is proud to be a longtime supporter of Ken Balcomb and his team. Help them help the whales. www.whaleresearch.com

More in this category: « A Little "Peace On Earth" for Washington's Orcas? Drop in mature male orcas part of historic fluctuations »