PRESS RELEASE: Usually this time of year, most Pacific Whale Watch Association boats start coming out of the water for the season and operators begin settling down for a long winter’s nap.

"It's been whale soup out there the last couple of weeks,” reports Capt. Hobbes Buchanan of San Juan Island Whale & Wildlife Tours. "We had some 20-plus transient orcas in San Juan Channel at Pt. Caution last week, and they went right into the entrance to Friday Harbor."

"Black-and-whites everywhere!," says Paulo OConnor, MSc. of Prince of Whales Whale Watching. "We’ve had transient orcas almost every day off of Victoria. We even had resident J-Pod here on Saturday. If you don’t mind bundling up, it's a great time to be on the water."

Prince of Whales is one of many PWWA businesses that generally operate year-round, "but these whales are definitely making us work overtime! We're now sending two Zodiacs some days out of Victoria. It's been pretty amazing."

Capt. Buchanan also confirmed the sighting of T075A, the Big Daddy of his pod. "He's one of the largest transient orcas I have ever seen," he explains. "This guy has a dorsal fin that literally goes to the sky, well over six feet tall. So we've got transients out there – or 'Ts,' as we call them – we've also got some residents still in, humpbacks hanging out here and there, seals, harbor porpoises, Dall's porpoises, Steller sea lions, eagles, tons of seabirds. And then you have the dozens of shades of white and grays in the winter skies. It just makes for some spectacular viewing."

"Transient sightings in the Salish Sea have surged in the last several months, and our scientists correlate that directly with a spike in the harbor seal population," explains Michael Harris, Executive Director of Pacific Whale Watch Association. "More seals, more Ts. That's bad news for the seals, I guess, but excellent news for anyone who wants to see the ocean’s top predators ply their trade."

Pacific Whale Watch Association crews say this fall and winter has been unlike anything recorded in the 20-year history of the Association. On November 8th, Prince of Whales Captain Mark Malleson came across the G2 and G27 matrilines of the Northern Resident Community of orcas foraging east of Race Rocks near Victoria, escorted by a group of Pacific white-sided dolphins. 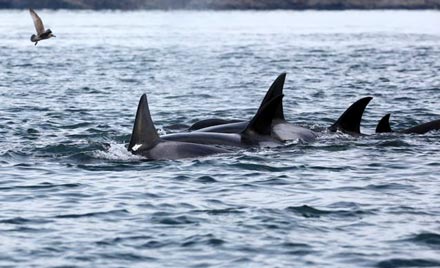 It was the first sighting of Northern orcas in this part of the Salish Sea in 13 years. Most exciting was a confirmed sighting off Victoria of one of the most endangered whales in the world – the north Pacific right whale, the first right whale seen here in over 62 years.

The fall and winter also continues what’s become known among crews as the humpback comeback – the reappearance in this area of humpback whales after nearly being wiped out a generation ago to commercial hunting. PWWA crews report behaviors never seen in these waters, from mothers bringing their calves into the Sound and Straits, to males singing, something this population was thought to almost exclusively do in their mating grounds in Hawai'i. 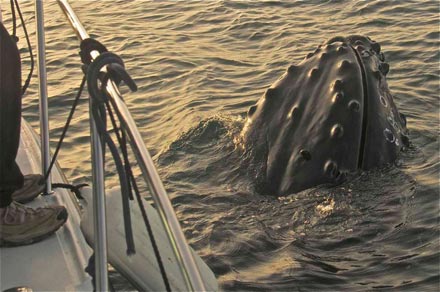 "In all my years this is the most amazing experience I've ever had with a humpback," says Capt. Jim Maya of Maya's Westside Whale Charters.

And orca scientists reported today that they are closer than ever to pinpointing the northernmost reaches of the range of the Northern and Southern Resident orcas, addressing a nagging question researchers have been trying to answer for over 40 years – where do the whales go in the winter? 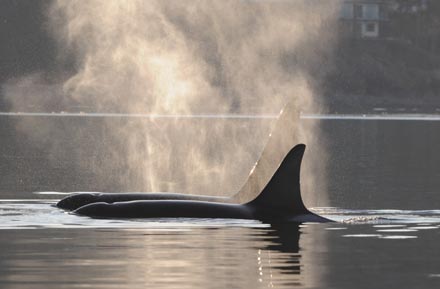 It’s a thrilling development for Ken Balcomb, Executive Director/Principal Investigator for The Center for Whale Research and science advisor to PWWA. And when the orcas do make their way through the Salish Sea, be they resident or transient, Balcomb says that this time of year provides unique opportunities for The Center’s year-round photo-identification work.

"The whales are not in the area as much in the winter months, but the winter lighting is awesome for photography!"

HOW TO HELP: For all those who want to help the whales, become a Member of The Center for Whale Research! The Pacific Whale Watch Association is proud to be a longtime supporter of Ken Balcomb and his team. Help them help the whales. www.whaleresearch.com