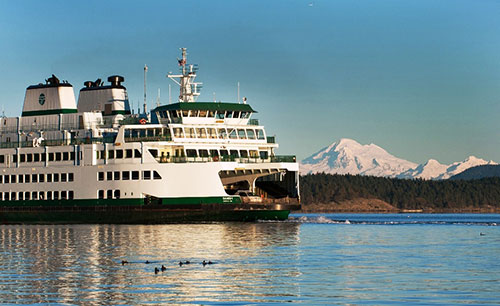 Ferry on the San Juan/Anacortes route with Mt. Baker in the background. Matt Pranger photo

"As a city surrounded by water, Seattle would probably come to a standstill if it weren’t for its ferry service, which is open to both passengers and motor vehicles. At all hours of the day, ferries crisscross the Puget Sound carrying passengers from the Bainbridge Island and Seattle harbors to nearly two dozen ports of call in between. According to the Washington States Department of Transportation, which operates the 23-ferry fleet, 25 million passengers ride its vessels each year, and it’s no surprise. Besides being a popular mode of transport for locals in a city known for its gridlock, it’s also one of the best ways to get a sweeping view of Seattle’s skyline, including the Space Needle."