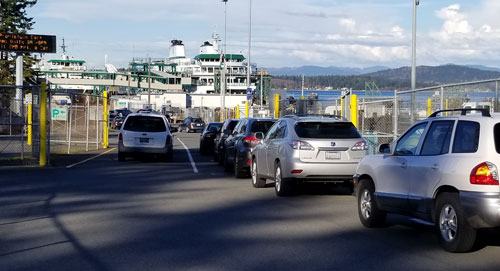 Vehicles loading at Anacortes terminal on a busy day. The drivers were instructed to park in the U.S. Customs lanes. Sharon Kivisto photo

To reduce or eliminate waiting, consider walking on or taking an early morning or late evening sailing. WSF will be adding sailings on some routes and several routes will be on holiday timetables, so be sure to check the sailing schedule before traveling. As a reminder, the Washington State Patrol will be searching for illegal fireworks, which are prohibited at WSF terminals and on WSF vessels.

On Thursday, July 4, people driving onto WSF's 11:55 a.m. and 12:40 p.m. departures out of Edmonds should plan for possible delays up to one hour upon arrival in Kingston due to the city's Fourth of July parade, when vehicle access in and out of the terminal will be restricted.