SEATTLE – For the first time in seven years, annual ridership aboard Washington State Ferries declined in 2019, dropping by 800,000 customers – 3.2% – to 23.9 million. Severe winter weather, construction in and around ferry terminals and increased ferry and transit options, are considered the main reasons for the decrease. 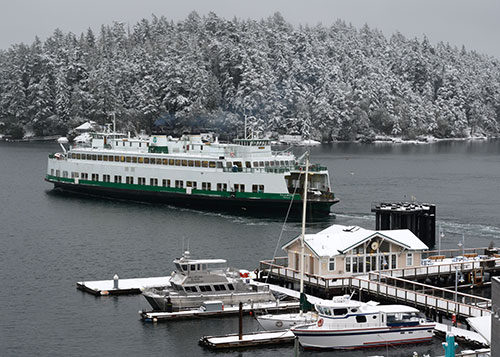 More than a third of the year-to-year decline came in February, when several snowstorms hit the Puget Sound region, causing many people to cancel or delay travel plans. During that time, there were only 10,000 ferry customers on some days, compared to 50,000 to 60,000 average daily winter ridership.

“Following all that snow, we reevaluated our storm plan to provide appropriate service that matches demand,” said WSF Assistant Secretary Amy Scarton. “We recently released new severe weather schedules that align with other reduced transit. We’ll let our customers know if and when we switch over to them through our ferry alerts and social media channels.”

Annually, the largest decrease of 2019 came on the Seattle/Bremerton route, where ridership was down 15%, or a drop of more than 400,000 customers from 2018. The largest jump came on the Southworth/Vashon segment of the “Triangle Route,” where ridership was up 5.2%, a gain of more than 10,000 customers over 2018 totals. This is the fourth year in a row that the biggest percentage increase has been on a route serving Southworth.

WSF customers took 162,136 trips aboard state ferries in 2019, travelling nearly 1 million miles – or more than 1,600 round trip drives from Seattle to Spokane and back. Nearly 1.2 million vehicle reservations were made for the Anacortes/San Juan Islands, Anacortes/Sidney, British Columbia and Port Townsend Coupeville routes last year, a 5.3% increase from 2018.

State ferry ridership is still forecast to grow by 30% to all-time highs by 2040. Last year, WSF released its 2040 Long Range Plan, which calls for 16 new vessels over the next 20 years to support this projected demand and maintain reliable service.

· Seattle/Bainbridge Island: Busiest route with 26% of total system ridership. Customers down 2.2%, vehicles down 6.9%.

· Mukilteo/Clinton: Route now has second highest total ridership despite a 1% decrease in customers. Remains busiest route for drivers, even with vehicles decreasing by 0.6%.

· Seattle/Bremerton: Largest year-to-year drop with customers down 15%, led by a decrease in walk-on passengers of 18.4%; vehicles down 8.5%.

· Anacortes/San Juan Islands: Customers and vehicles both down 1%. A ridership decrease of 6.2% on the interisland segment was offset by small increases in customers to Shaw Island and Orcas Island, as well as a bump in vehicles to Orcas Island and Friday Harbor.

· Point Defiance/Tahlequah: Eighth straight year of growth with customers up 1.2% and vehicles up 0.3%; walk-on passengers up 4.4%.

· Anacortes/Friday Harbor/Sidney, British Columbia: Customers up 4.3% and vehicles up 4.4% despite a four-week suspension of the route in late fall due to a major maintenance backlog that rendered both ferries approved for international service (Elwha and Chelan) unavailable.

Washington State Ferries, a division of the Washington State Department of Transportation, is the largest ferry system in the U.S. and safely and efficiently carries nearly 24 million people a year through some of the most majestic scenery in the world. For breaking news and the latest information, follow WSF on Twitter and Facebook.